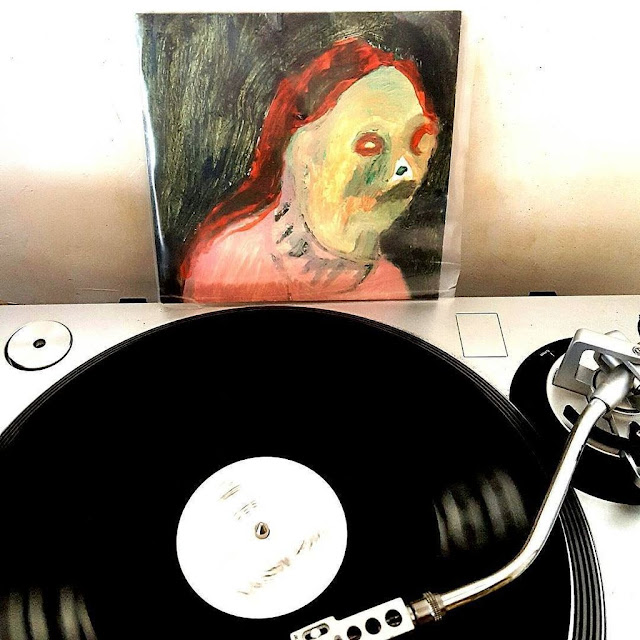 It's only been in the last month or so that I've been hipped to Australian band Thigh Master and their 2016 album Early Times. Ever since though the record has been a constant not only at Smashin' Transistors headquarters as well as my radio show, but everywhere else I roam.This brand new single on 12XU will now be joining on such travels too.

With Byrdsian guitar jangle transmogrified into something less hippie folk rock but a lot more aberrant, vocals that manage to sound lackadaisical and exuberant at the same time and bass & drum pair that can bash their way both loudly or discreet if the moment calls for it, thought of Flying Nun bands come to mind pretty much immediately. While I think the band would not be likely to deny such a comparison, they also aren't simply just doing some paint by numbers with sound here either.

Side one's "BBC" follows a path that a band like the Clean cut but the chiming of the six strings snakes it's way through leafy brambles often, then returns back with a pounce. There's a sense of frowning at the heavy weather hanging overhead in singer Matthew Ford's voice but it also seems as if he see's a break in clouds and sunshine ahead but, for now, he's just going to keep that all to himself.

Whereas that song strolls zig zaggedly through some dew misted greenery, the flip's "Park Road Clinical"  lunges through a late night/early morning walk down a grey strip of concrete while being guided by the twinkling of colored lights off in the distance.
Get it at 12xu.bigcartel.com
Posted by Dale Merrill