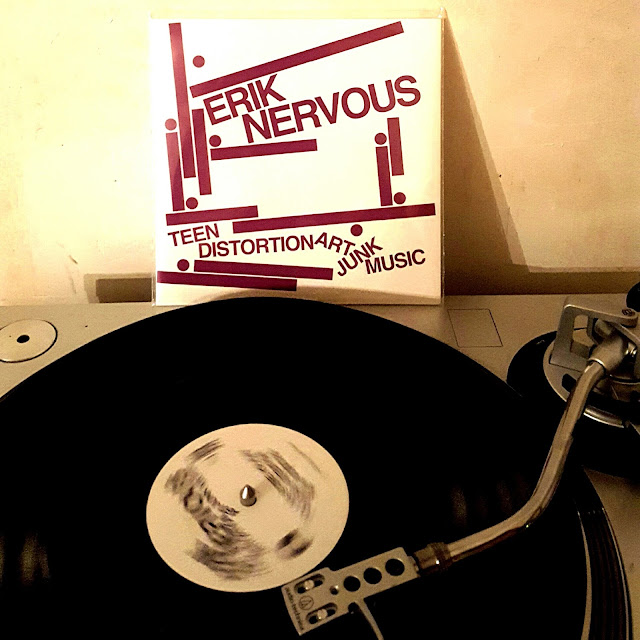 It seems that most of the punk rock teenagers today are afraid to get all weird. Who knows what they're afraid of. Maybe it's because punk rock is so normal now that teenagers can have conversations with their grandparents about the time they Clash open for the Who at the local Enormousdome or hearing their mom telling the story about how she met their dad while doing keg stands out in the parking lot before Lollapalooza or something and they think they'll never be as cool.
Luckily, not all "the kids" are falling for it. One of them that's not is Erik Nervous. Taking cue's from the NWI "scene" that begat the sorts such as the Coneheads, the name of the game is channeling all his teenager awkwardness, angst and uncontrollable fidgeting into short spastic bursts of uproariousness.
Armed with a guitar that sounds like a shoebox with drums to match, some cheesy synths here and there and a caffeinated bellow of alienation, Erik plays all the instruments here, flailing away at them and capturing it all on a Tascam 424 mk.II that had probably been sitting in some closet for years.
Some songs, like the record's opener "Nervous Child" and "Dollar Store Holiday", are a way worked tizzy similar to that to these ears resemble something a bit like the first couple of Tyvek singles but with more abandon and have me actually wondering if the needle is going to fly off the record at any second from all the jerky movements the music is making. That and I swear that one of my cat's thought that something grabby and pinchy was going to jump out of the speakers when "I'm A Brick" came on because he hightailed it out of the room like a flash within seconds of it starting.
There's also moments on the record though where something...ummm...poppy oozes into the situation too. The wiggly synth's that do their large and in charge part to make "People Falling Over" vibrate would land at the top of any local new wave chart of any town town Erik would call home and the record's closer, "New Potatoes", would get a few people suspended for a few days for doing the pogo at a high school dance.
Neck Chop Records
7inch Indiana Michigan Neck Chop