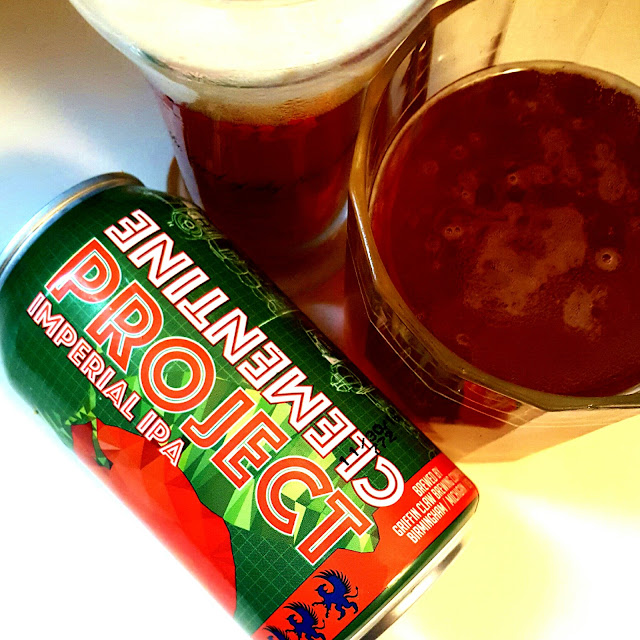 When I saw this on the "Just In" shelf at a local beer monger I thought "What an odd time of the year to release a summery and citrusy brew." I mean, it's winter. As I type this it is 14 °F outside. It's usually dark and rich beers that may or may not be barrel aged and their warming effect that get all the attention this time of the year.
Then I thought about. Boxes of clementines are always a gift from someone for Christmas. It started to make sense to me. And with the grey skies and painful cold blasts in the great out-of-doors, something that resembles sunshine can be very welcoming.
The copper color reminded me of the first few minutes of sunrise. The scents of citrus and it's zests were right on top. Behind it was a sweet roasted scent and buttery toffee. On first sip, the citrus notes were very big and running neck and neck with a lot of piney hops. After letting it breath a bit, things became more well rounded with other flavors coming out. The tang took on flavors of pineapple and mango along with the obvious sweet orange flavors and the IPA backbone dialed back on being just another hop monster letting the malt come out a bit giving a fresh baked bread characteristic. Like toast and marmalade? Yeah, a bit like that. The finish is sweet and a bit tart that sticks around for a bit but not in a way that a lot of imperial IPA's stick for what seems like hours.
The way the 9% abv goes about here is interesting. It's not "hot" or too pronounced but with each sip there is something lingering that reminds you that this isn't just some kind of shandy that can be knocked backed by the minute and still manage to walk a straight line to go jump in the lake. www.griffinclawbrewingcompany.com
Posted by Dale Merrill