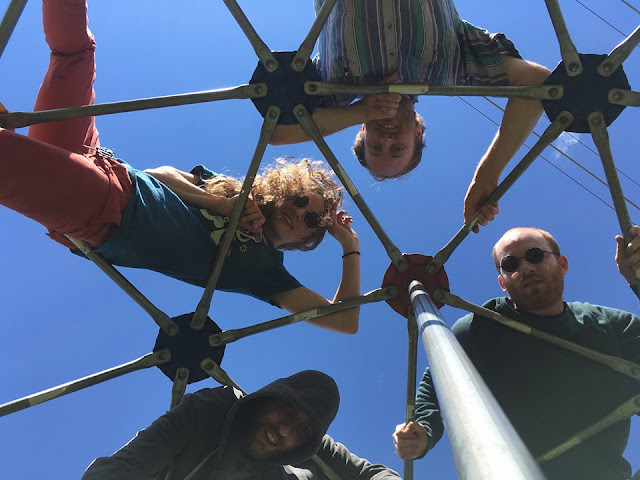 Now that every schmo in who has ever had a band is going around talking about how vinyl is "back", every band in the planet is clamoring to get what would've been on a CD-R "record label" on to venerable format as their artistic statement.
I don't know how many records the Miami Dolphins (who are actually from Minneapolis and are not dolphins but actual human beings) have released before this one but they're making sure that they get the most out of the package as far as the art side of things are concerned.
The sleeve itself is jam packed with a bunch of stickers and everything appears to be hand designed. Inside there's a 12 page booklet that only includes the usual credits, lyrics and contact info but things like pen drawings and brain teasers.
The music itself is a bit of a brain teaser too. The bedroom-core-fi goes full band sound makes one wonder if they're concentrating on putting on an arty psych punk Halloween party for a kindergarten kids and subliminally turn them onto Yoko Ono and Half Japanese records  ("Quail Birth" and "Piling") or, like on "Disconnected" and "Scarlette", they experienced Deerhoof have a nervous breakdown in front of them and they only way they can explain what they saw is by banging it out themselves.
www.fperecs.com
Posted by Dale Merrill