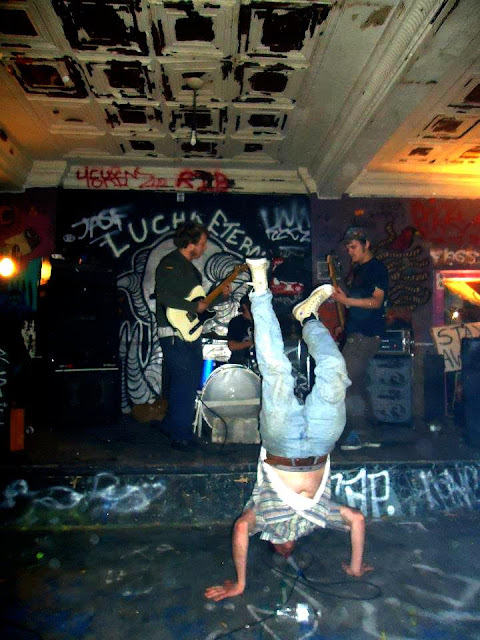 In 2013, Cleveland's Bad Noids was one of the few bands that renewed my faith in hardcore (or whatever the kids are all it this day) with their album Everything From Soup To Dessert. It was bent, twisted and absolutely raged.
In '14 and '15 not much was heard (at least record wise) from them. Did they rage so hard that it caused them burst into flames and/or vaporize? Well, this three song blaster out confirms that such a thing hasn't happened (yet) but their world of weirdness was off on an adventure or two.
Some of it time traveling even. The acid punk slobberer "Into The Future" rumbles like it shoul be gurgling out of a biker club house that has members who are hell bent to run the drug trade along the asteroid belts. Subhuman wah-wah guitar heroics battle it out with rock throwing neanderthals over who gets to slither first into a bog of beef tallow, dirty underwear and kerosene.
Whatever it was though that induced the band to take that psych trip wears off the crash is hard and the hangover harsh. The hundred tiny jackhammers in their brain cause the lash out fast and furiously. "Twelve Years Old" is something like a bunch of 8 years old were given an hour to think up the most punk rock song ever while "My Friend Greg" could be those same 8 year old thinking up a song to play while strapping their big brother's bully friend to the front of a locomotive.
www.feelitrecordshop.com
Posted by Dale Merrill

Email ThisBlogThis!Share to TwitterShare to FacebookShare to Pinterest
Labels: 7inch, Feel It, Ohio