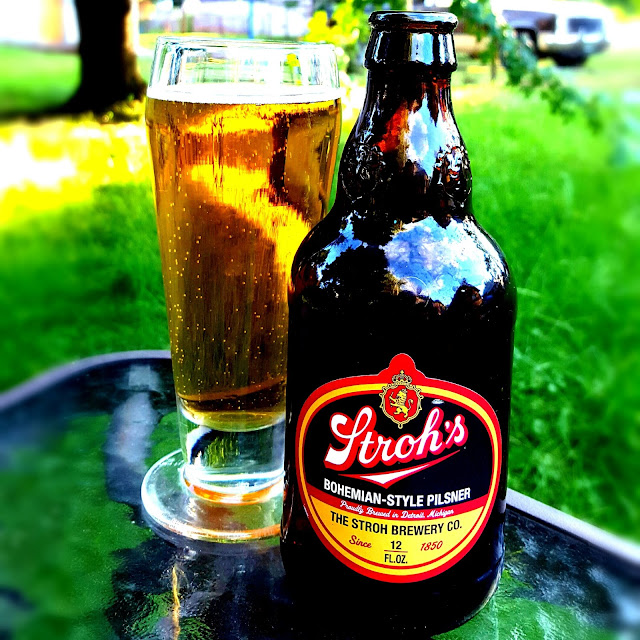 When the word hit the news that Stroh's would be brewed in Detroit again, you would've thought from the buzz and excitement about it all over internet that it was announced that Bob Seger was going to go door to door and hand everyone a bottle or something.
By the time I started drinking Stroh's, the company was the 3rd largest brewery in the country but was also starting to fall apart. Their home base brewery in Detroit was closed in 1985 (and along with it, the fire brewing process they proudly boasted about on it labels) and by 1999, all the company's assets were sold off essentially making it finally really only Stroh's in name is it was brewed by contract all over different parts of the country. That version (or whatever the facsimile of it is these days at least) can be found in it's blue can in parts of the country to this this day.
From what I remember it was fizzy, yellow barley pop. It had a bit more bite then some other macros and less of that weird corn syrup and carbonated water flavor than others. It was your standard beer but, as a Michigander, it was OUR standard. As the years went on though, whatever distinct characters it had slipped away more and more making it interchangeable with most other budget swag on the shelves.
This new Stroh's, brewed at  Big Boy Restaurant associated Brew Detroit LLC in Detroit's Corktown neighborhood, is a bit more "grown up" than that if, at least, by a tiny bit. The abv is a little higher for starters (5.5% vs 4.8%) along with other things that are easier to detect with the eye, nose and and tongue. The color itself is a more of a gold than the faded yellow straw for beginners. The head is a bit stronger too and it holds on for more than a few seconds. Unlike smelling just like only damp saltines, there are also faint notes of honey on the nose here.
The flavor is crisp and fresh. The malt base is sturdy (I am guessing it's the choice of Vienna malt that does the trick) instead of watered down and has a slight sweetness to it. The biggest twist from what I remember from any Stroh's I've had back in the 80's up until even more recent times at this point though is a slightly bitter but not biting to hard hop notes. Like all marcos, regular Stroh's seemed to have just enough to have them play their part in the brewing process but never a priority. Here, they are noticeable but not over the top making it taste closer to a good, solid German pilsner than whatever the really, really old coots are drinking at the down at the corner bar. As it warms and breaths a little, pine notes come a little more to the forefront as do the faint flavor of corn chips.
It's pretty obvious that this beer is aiming for a retro-hound crowd and, like the 1960's recipe Schlitz that can be found around at some better beer stores, I think they nailed it. Don't pick this up expecting your mind to be blown but if you're looking for something that's tastes like the kind of beer our dad's and grandpa's drank when they were younger or a lawnmower beer with a little more oomph this could be your fix.
strohbeer.com
Posted by Dale Merrill