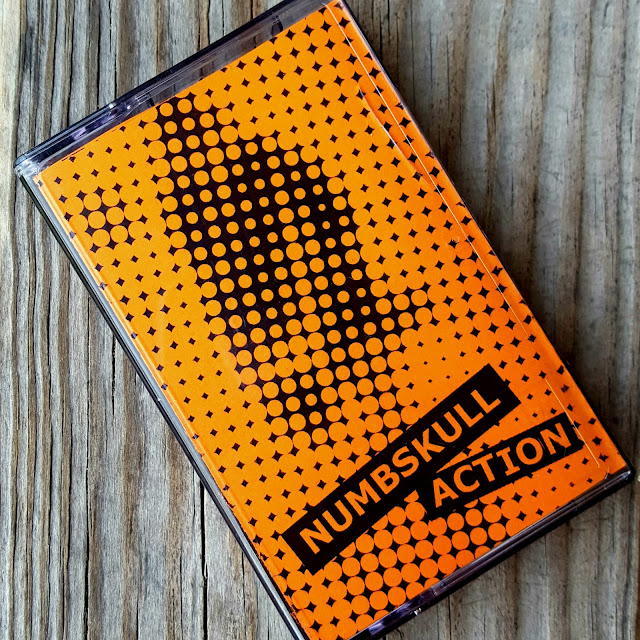 Numbskull Action are from Woking, Surrey. There's only two things I know about the place. One is that it was the first place the Martians decided to land in The War Of The Worlds. The other is that is where the Jam were from.
For the latter, the comparisons stop after citing that both are trios with a penchant for songs of the 60's. The former though it is like they were beamed down to earth by waves emanating from Planet X. They were sent, if not to cause mayhem and panic, to at least destroy and annoy.
Recorded live on a 4 track, the lo-fi crud licks the goo that oozes out of a corroded trashcan that sits in Supercharger's back alley on lunkheaded smashers like "Bad Advice (It's Not Nice)" and "I Don't Know Your Name". "It's Alright (If You Wanna Fight)" could probably send Billy Childish searching for earplugs while shouting "This is too loud and way ridiculous."
When the band takes a break from desecrating Chuck Berry's grave (even though he's not dead yet) by mangling primitive rock-n-roll chugs and using a third chord only begrudgingly, their cutting bubblegum with buzzsaws with "Nothing Lost" and fashioning them into shivs or, like on "4 On 1" and "TV Commercial", writing some barking answer songs to a world that didn't know Oblivians needed any.
Needless to say, this has lately become the soundtrack in the beat up, rust bucket of a van that I drive ONLY to work and back. Send these guys some money because I don't think they can hold down job because they're keeping busy with bathing in cheap beer and irritating the neighbors.
noteenrecords.blogspot.co.uk

Email ThisBlogThis!Share to TwitterShare to FacebookShare to Pinterest
Labels: cassette, England, No Teen