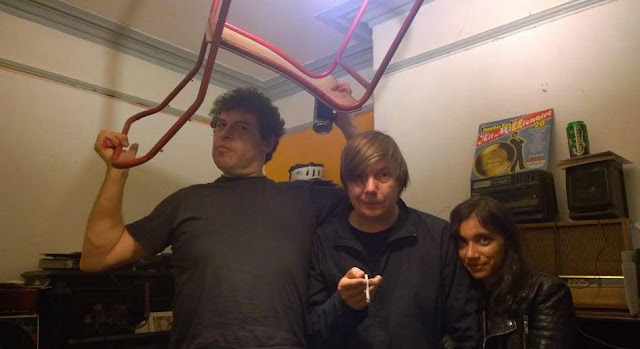 Leeds, England's City Yelps cassette of a couple years back, Cheap Psych, got a lot of play around the Smashin' Transistors social gatherings. When I sat down to absorb their band new record a lot of the similar impressions I gushed about that tape came to mind here. Swell Maps....double cheeseburgers...blokes who can discuss things of bookish matters (after all, Leeds has the 4th largest student population in the UK) as well as which budget lager will hurt the least the next morning and their favorite garage punk 45's. All delivered, I may add, in a northern brogue where I have to ask them to repeat it or wonder if I need a translator.
There was a vibe on the cassette of a few friends getting together in cramped space and having a go at celebrating the sound often lost & forgotten about indie singles from the early part of the eighties. If it was all shot on film it would been composed of square format stills in faded, fuzzy black and white with streaks of glare. For this album though, the scenes set are more cinematic and wide screen.
While the usage of colors of sound on ...Half Hour are more vivid than its predecessor the band hasn't gone day-glo or anything. Sure, there's more clarity but, as the opener "Shut Up" can attest, there's still plenty bashed up blurriness.
Some songs, such as the disheveled clarions of  "We Like The Hours" & "Music For Adverts" and the sleet storm splatter that's all over "Music & Movements", sound like cantankerous giants chewing on copies of C-86 that were found in a compost pile behind Mark E. Smith's (Brix era) place.
Now, I know as soon as someone throws out a C-86 reference a lot jump for joy as far as jangly and shambling pop tinged post punk goes but for others is sends up a red flag that things may just turn to milk and water. Shaun's barrel chested yowl across the songs and the way "Making Noise" throws icy daggers, the night terror space(man) trip on "The Corn" and "Now" resembles being knocked down and then covered in an avalanche assure their much more bold than that by looking things straight in the eyes instead of staring at their feet.
Find the City Yelps on Facebook
Posted by Dale Merrill