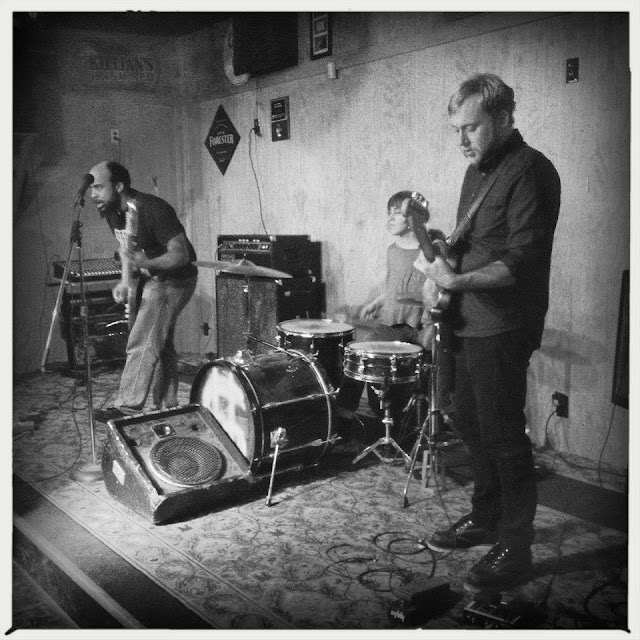 Ohio's Bloody Show kingpin Jah Nada has a lot on his mind. With Laura of Raw Pony bashing the tubs and Sex Tide's Chris hard rockin' sick licks as reinforcements to his gut rumbling bass thumps, he doesn't hesitate letting people what he's thinking.
Opening with "American Pimp" the record drops a lumbering bomb of thudding scuzz and rock-n-roll flash. Given the song title, anyone expecting some hustler jivin' to kick in on the mic are gonna be taken aback cuz Jah belts like a voice of annihilation here. While the listener is still fazed from that detonation, they get hit with a one-two clobber of the high powered Detroit proto-punk of "Magic Negro" (think The MC5 and Death playing at the same time while the most agitated soul shouter on the planet calls bullshit on several points of view) and the incensed "bell hooks", which gives a take most wont bother to discuss in some feminist theory course. Side one closes out with some Ohio punk rock history by giving Pere Ubu's "Non-Alignment Pact" a furious clobbering.
The rumbling that kicks off side two's "Back On The Track" rolls into town like bikers fed on fuzz, swamp water and street fights. The enraged boogie "When I'm High"  is like some kinda 70's Ted Nugent party/fightin' jolt blasting out of a muscle car if Ted was a million percent less douchebag, stopped towing the Nancy Reagan line and listened to more Eddie Hazel and less whatever makes him going around claiming he's from a long spiritual line of bluesmen. The mood gets foreboding on "Fuckaround" with it's metallic tinged downcast goth chords and stoned disposition providing an icy pillar to make an inconsolable rap and bellow from.
www.heelturnrecords.com
12inch Heel Turn Ohio