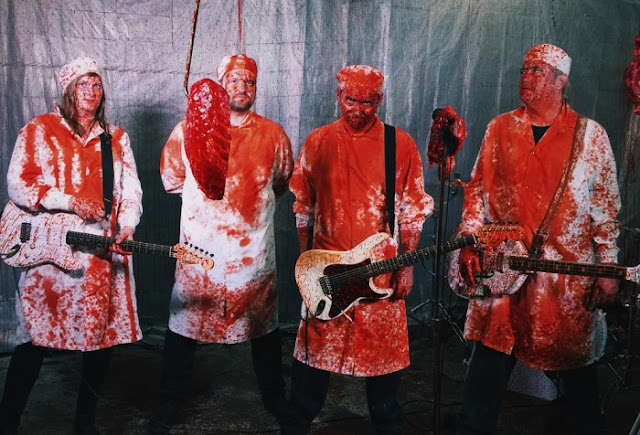 Thomas Jackson Potter has always been a part of some stellar rock-n-roll combos. There was his trifecta of bad ass drummers he had backing him up through his Bantam Rooster days, the punk rockers gone funk jokers in the Detroit City Council and, of course, his time on baritone guitar in the most crucial party band line up of the Dirtbombs. His latest gang of malcontents (Lindsay of No Bails on guitar, skinsman Chinese Millionaire Mark and some Ben Franklin looking cat who's background I don't know anything about but is a pretty rockin' dude on bass) may the mightiest one yet.
Even if the album's lead off track "Safe Word" wasn't so claret splattered, it would still sound like guts flying everywhere. Potter's serving up his patented bloodcurdling holler while the band down-strokes madly like a spun too tight Cosmic Psychos.
A demented AmRep/SubPop at their miscreant high points loom in a rock-n-roll swing on songs like the absolutely sinister "Moisture Technician", "She Collects Calendars" (a song which also raises the question "was the melody line slightly nicked from the title theme of Faster Pussycat! Kill! Kill!?"), the sound of Devo herks-n-jerks being mutilated by sledgehammers on "Uptight" and the cruise town, burn rubber and flip off the cops when they pass by and out of the line of sight "Cosmic Shadow", "Cracked Dracula" and "Trinity Sue."
The record is not all just totally punk scuzz bombs and dirt bag teenage fuzz mustache and sleeveless jean jacket jams though either. "Random Name Generator" finds blues getting strangled and left for dead down some totally creepy side street. Then along comes some sick pervert who fancies himself as a dive bar Bryan Ferry with an unhealthy obsession for the first two Psychedelic Furs albums on "Rock Paper Rapist" to gather up the pieces and take back the pieces and put in a jar to keep by his bedside table.
Some dogs can be trained with a little tough love and a lot of work. Yanking hard on the leash though doesn't seem like it'll tame the rabidness here though.
www.facebook.com/chokechains
Posted by Dale Merrill