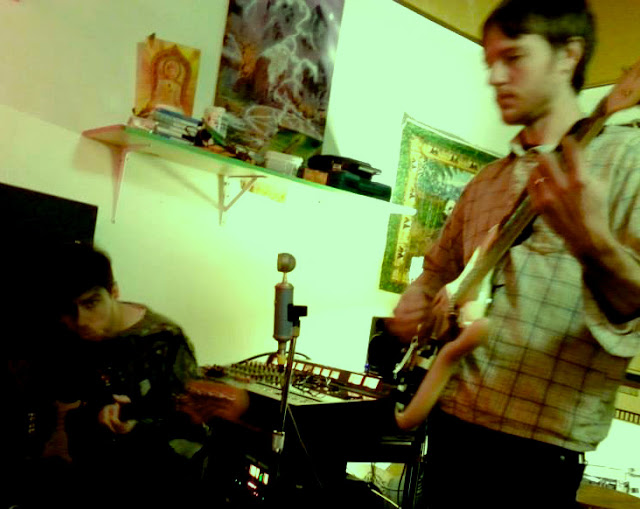 I first met Tang Soleil's main man Matt over a decade and a half ago. At the time he was one of the guitar playing kids in the Wisconsin teenage rock-n-roll band the Mystery Girls. At first introduction he seemed to the "quiet one" in the band.
As a man of what seemed at the time of few words, when he would chime in though it would be something perhaps a little more acerbic or out of left field and usually funny as hell but always ponder and thought about before it was said. The age old "you know what they say about the quiet ones" adage, I guess. What was learned was that he was most likely responsible for the little twisted parts the MG's would revel in on a common occasion as anyone else in the band.
When the Mystery Girls packed it in in the late 00's, Matt made new surroundings in Montreal, Quebec. In the last few years he got this new rock-n-roll combo going with Ysael of the Demon's Claws and some other cats.
Given the lineage of the band it would be to call this album a "garage rock" record and carry on from there. Unlike the current climate of what a lot of the bands that stand under that umbrella these days do though, this record doesn't play the we're acting so bashful it hurts card or spend time imagining what "Louie, Louie" would sound like if it was written by the Smiths and then ran through a bunch of digital reverb.
After an interlude of engines revving and some broken gospel, the choppy chords of "Some Other Train" blaaang out for a few seconds before they sound like they're about to eaten by the tape machine. Composure is regained quickly and then the song channels things from the Move's Shazam without all the extra heavy frilly baggage but, with vocals wracked with frustration and wobbly string fills, possibly much more hungover. It's followed by "Tambourine Strings", a song that has that some sorta post-Mersybeat jangle/noise that Freakbeat agents specialized in, with the band pushing it's take on backmasking and hidden messages upfront and mangled center.
Next is a cover of the Godz (the New York folk-rock weirdos of the 60's/not the hard rockers from Ohio of the the 1970's) "Ruby Red." While the original is sparse and well, weirdo folk rock, the version here is electrified with a penchant for fuzz and a desperate yearning. Oddly enough, a second cover song on the record, Françoise Hardy's "J'Ai Coupé Le Téléphone", the band stays pretty faithful to the original by keeping the baked in Wah-Wah on a summer day feeling intact but also somehow making it sound like they dealing with the heat by hanging out in a musty cellar instead of frolicking on a beach.
While psychedelic pop is the main hue across the record the band isn't afraid of making colors clash. "Mirror Maze" and "Park and Ride" clatter and bop like bubblegum songs for little kids shows if little kids were hip to Snakefinger's Chewing Hides the Sound and both "Canadian Son (To Terry Jacks)" and "Beth's P.A." are almost like modern cowboy songs. The former forming an ill shaped waltz while the latter may someday be a smash on the honky-tonk jukeboxes of the moon.
Then there's "the single" from the record "Spiral Horned Merino Wether." While the rest of the songs get weird but keep things efficient by clocking around the two and half minute mark for the most part, things stretch out to over four and get really, really weird. Garage punk crunch dissolve into lifting baroque passages only to be agitated by Musique Concrète movements which jostle things back into punk rock blare again. The video they made for the song is a bit of an edit so it doesn't highlight ALL the oddness going on BUT does manage to be as much of a head scratcher as the song is to absorb.
Yeah, I am always behind on reviews and I know it's a new year but this is one of the most essential records of 2015.
www.dustymedical.com
Posted by Dale Merrill