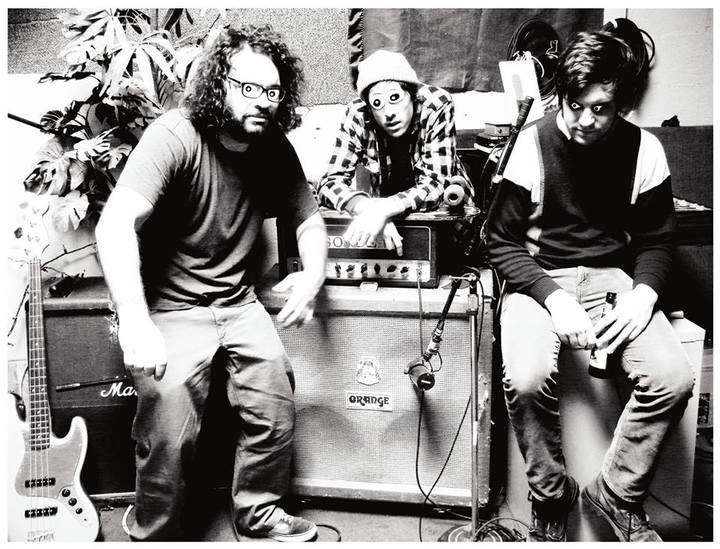 To declare a record "punk rock" leaves a lot of interpretation open. People have different impression and ideas of what punk rock is about. Different reference points and rule books and so on for each and everyone. To pin down the kind of punk rock state of mind Kentucky's Tropical Trash may confound some while others will find it being a gauntlet thrown down for others to crawl outside of some predictable boxes and step up their game.
Charging right out the gate with a surf drum beat played at speed metal velocity that doesn't let up for the song’s duration, "New Flesh" builds tension up with a hammering one chord down stroke and pummeling, basic bass line foundation for the burly voice singer to bark contemptuous sentiments over. Things hit their boiling point halfway through and it burst into a faceful of searing feedback. The squalls intensify and ooze more puss on the explosively dark next track "DNA Smoke."
There are moments where the band picks up the direction bands like Fugazi and Shellac for instance took the so called "post-hardcore" movement (before the palm muting weigh lifters, fat bald guys with goatees and Amish as tattoo'd hipsters look started to infect it all with effects pedals and "emotional" screeching about the anger of being raised in a subdivision came about), like jittery and soil shaking "Vertical Gang" and the title track's feeling out aural whiplash, but it's the moments where the songs sound like a fireball ball being shot out of cannon like "Leisure Exposure" and how "Fat Kid's Wig" feels like plowing through a ten car pile up and coming out unscathed that assure the listener that the band has their own ideas how things are to be done. For instance, even if "the kids" started to think something like "Heehaw Collider" would be pit worthy the silent gaps of emptiness that dot the song would have them standing around and whining about it (and looking like the goofs at EDM shows waiting for the always now predictable bass drop) while the two close to ten minute lurching, lumbering and doom laden closers, the Big Black at half speed vibed "Knowing" and the Flipper using Black Sabbath tricks to peel paint tricks on "Pig Sweat" would send them back to get in mom's SUV a minute or so into either song.
To declare Tropical Trash UFO Rot as a punk rock record that will still sound current 5, 10 or even 20 years down the road may even confounding or preposterous to some but from where it stands now this scribe is going to make the claim. If we as a civilization are even still around in two decades we can discuss it again then.
http://loadrecords.com
Kentucky Load LP