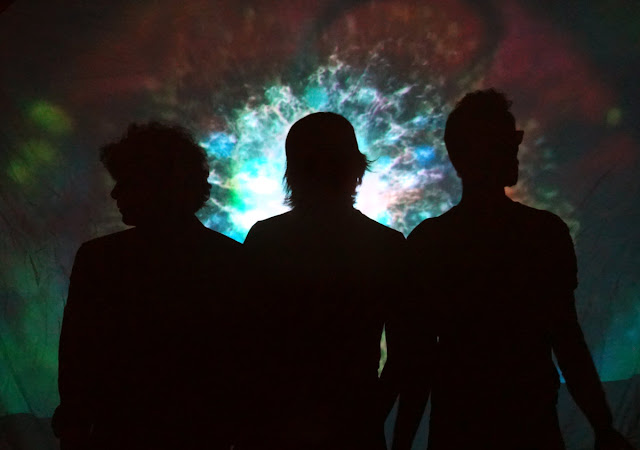 Presided over by earthy Fender Rhodes and synths shooting for something celestial along with live drums and no guitars, this Oakland, CA combo tickers with something organic for a space age.
A slightly chopped and humanoid beat sets the tone for a fuzzy & slightly blanket of an electric piano to wrap and keep things warm while icy bloops and beeps soar around on "Light's Out." It's like that stoned in the afternoon while listening to Steely Dan vibe that Junip or Tame Impala did way too much on their last album. The difference though is that where those bands act all precious and coy, these guys are not hiding it. The occasional prog-leaning rears its head a time or two but they manage to keep it under control by not playing too many notes at once. When the echoy new wave vocals kick in the scene changes from cocaine at the martini party to a rain washed and neon lit street scene from a slightly arty 80s movie.
Imagine standing outside a really seedy hotel bar. Expecting worn red velvet upholstery and fake Tiffany lamps caked with years of cigarette smoke and dust. Hesitant to walk in in you're find that everything is shiny, silver PVC fabric and flickering fluorescent light. The band starts to play and it sounds like this record's flipside "Outer Orbit." The drinks are just well booze but you feel you may start to float in space. A jazzy space.
https://www.facebook.com/outerembassy
7inch California Outer Sounds