OBN IIIs "Worth A Lot Of Money" LP 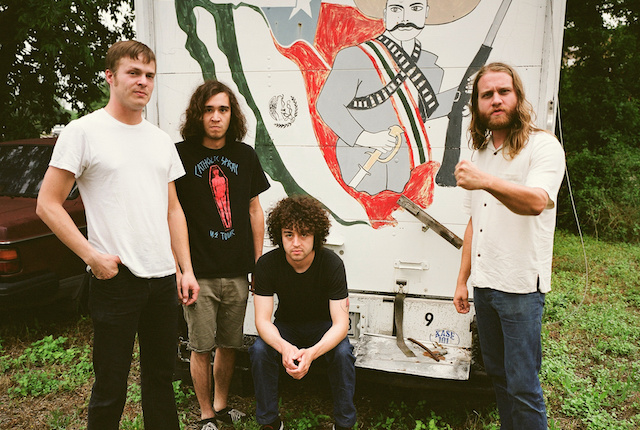 The OBN IIIs have always brought the rock. And not just any rock either. It's a bit like the kind of rock that was heard blasting out of high school auto shop in the late 70s/early 80s. It's a bit like the kind of rock that was heard in a small town downtown on a Friday night blasting out of the cars the high schoolers were working on in said auto shop.
It's a fist in the air, anthemic kind of rock. It's also tends to be more smart assed and clever than just straight up lunkheaded and proud about it than what a lot of people would think when describing the type of rock that it is.  Sure, it's cocky and the attitude is one of folks that don't really care if you think they play to loud and smell like bourbon sweat and cigarette butts.
While previous records by the band hinted a little bit here and there that they weren't perhaps ashamed of rockin' out to hard rock heroes who's best songs haven't gotten played on classic rock radio in years there was always punk rock goo all over them that was fit for dingy, dank basements and humidity stricken back yard barbeques. Here, with the production of assistance of a cat who has twiddled the knobs for the likes of the ...And You Will Know Us By Our Trail Of Dead, Heartless Bastards, Spoon and Lee Ann Womack (?!?!), Mike McCarthy, some of the murk has been buffed away, exposing a bit more color than expected while still keeping the grit intact.
The swagger on tracks like the slow burning "What Happened To You", "Let The Music", which sounds like a soundtrack for good ol' fashioned fight where guitars are flashed like switchblades, the way "The Stalker" gallops into a wall of a fire and swerving chug on the night's not over but hangover gonna be hell in the morning on "You Can Never Let Me Down" sound like the ghost of Phil Lynott are in the room. Not just in the way singer Orville Neely channels the tough guy with a tarnished heart of gold delivery but also from the doubled up guitar harmonies that peel off notes and chords like riding through peaks and valleys of Thin Lizzy badassery and the way the rhythm blast holes through any obstacles that are blocking the way for them to meet their destination.
The rock doesn't stop just there though. "New Money", a checklist on how to blow cash fun and recklessly is like AC/DC discovering a couple new chords after falling into a fountain of youth behind the back of grease covered rib joint joint, the album's opener "New Trash" and the street level boogie on "Standing" and "I'm Done" resemble ZZ Top's Tres Hombres spun at twice the speed and illuminated by exploding flash pots.
It's a been a common statement for years now that rock is dead. That's usually followed by a "Rock Is Back" declaration. It sounds like the OBN IIIs don't give a damn either way. They just know it feels good.
http://12xu.net
Posted by Dale Merrill