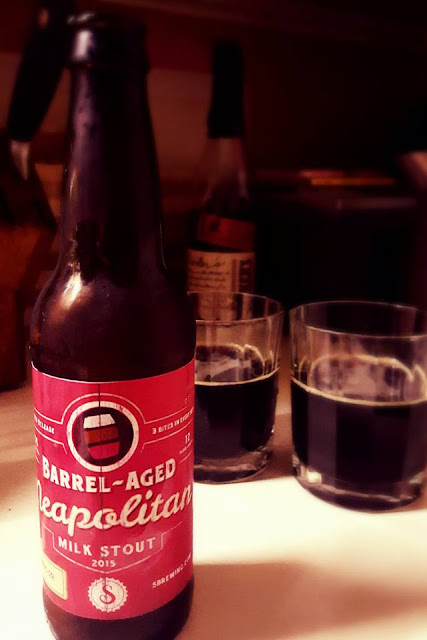 A perfect way to describe Saugatuck's Neapolitan Stout is "fun." Like the ice cream it is styled after, in Saugatuck's regular version of this milk stout you can taste the different layers of flavors as the pass through the lips, across the palate and down the throat. It then finishes in a blend of them all the same way the ice cream does if it melts a little bit in the bowl before it is all finished. Best part though? No ice cream head burn if you sip too fast (I mean, unless you serve all beer at some supercold temperature like when the mountains turn blue on a Coors Light can. You realize that is done is because the colder a beer is, the less flavors come out, right? Yep, basically the big beers have figured out if it's as close as it can to freezing without actually doing so less people will notice how lame their product really is.)
So, what would make this beer even more fun? Well, barrel aging it of course.
The color is almost black with a slight ruby hue surrounding it. The head is minimal and fades almost immediately, leaving slight clouds and a rim ring behind. The scent of chocolate and strawberry waft out of the glass and can be smelled even at 5 feet away once the brew starts breathing. A touch of bourbon in the aroma become detectable at that time too.
First thing on the lips and tongue noticed is that the beer is a bit sweeter than the regular version. The chocolate is the first thing that comes to the forefront. Very rich and, to an extent, resembling "The Original" Bosco syrup in it's sweetness in the front end of it's flavor but there's also a bit of baking chocolate bitters and smoke that linger underneath. The middle brings out some faint notes of oak and roasted malts.There's some vanilla are too but is a bit muted. That seemed odd because it's one of the flavors that usually comes to mind for me when tasting a barrel aged brew. The strawberries come out huge in the finish. Almost o an extent where they're trying to push everything else out of the way.
I will go record saying that this, like it's non aged partner, is fun to drink but felt the barrel aging didn't really add too much to it either, other than a little darkness to the chocolate, amping up the fruit notes almost a little too much (unless that was something that was done at the brewery this year for this special batch in the first place. I haven't had a regular bottle this year to see if anything about its balance has changed from how it's tasted in the past.) It lacked a bit of the complexities and didn't really seem worth the couple dollars more a bottle price point to me.
www.saugatuckbrewing.com
Posted by Dale Merrill