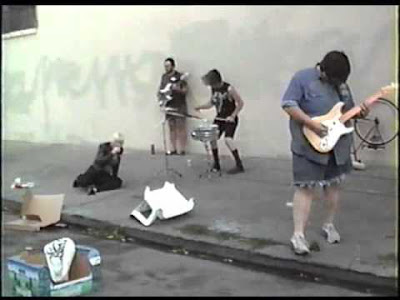 This probably isn't a surprise to most but there are at least two factions of sounds declaring to be playing post-hardcore.
The one faction dreams of playing the Warped Tour or some other big brand sponsored "fest" where getting showered in free sneakers, glow in the dark condoms and beard care products is a crucial part of their pay. The other gets kicked out of such events for carrying flammable materials and boxes of strike anywhere matches.
The one side spends countless hours in the studio, crafting parts that sound like they are part of a math formula and then pile on a bunch of post production wizardry to convey some bullshit "we're so fucking heavy" sound. The other simply has someone set up some mics so they blasts through a few chords and full out rage all the through.
One straight faced declares themselves post hardcore when asked what kind of music they play (probably because saying Algebra Metal with a whiny guy whining and a grunting guy grunting is too much of a mouthful) while the other probably just says they're punk rock.
Oakland, California's Violence Creeps is in the latter group.
The clanging chords and cardboard box drums that come immediately crashing out on the "Sex Menace" sound like nine year olds learning how to downstroke chords while obsessing over Sonic Youth's Bad Moon Rising. Then it's collapses into nervy, clunking basslines and scratchy guitars which give a sparse but harsh backdrop for singer Amber Feigel's hoarse bark to shove razor wire through the listeners ear and pull it out the other. As it heats up things start to splatter for a crescendo of striking cobras and electrical shocks. "Drop Out" then drops in for minute or so of blurry speed.
A stuttery and stunted martial beat and a riff that resembles throwing a copy of Black Flag's In My Head on the floor so a lard slathered Ted Falconi can roll around on it. Then a ghost of someone who died of a lung infection trying to master Steve MacKay's sax lines on the Stooges Funhouse shows up with some some acid that is guaranteed a bad trip. It ends up sounding like the b-side's "On My Turf."
violencecreeps.bandcamp.com
Posted by Dale Merrill

Email ThisBlogThis!Share to TwitterShare to FacebookShare to Pinterest
Labels: 7in EP, California, VEECEE