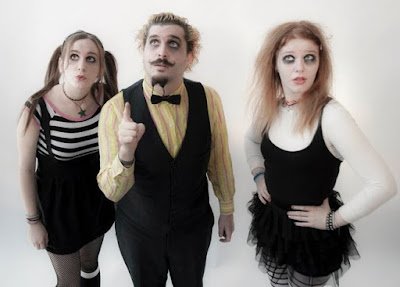 If this Indianapolis combo had a job picking up people's trash they would not go around telling people they were sanitation engineers. They would proudly claim, in their best boozed up horror movie host tone, that they are GARBAGE (WO) MEN!
Gurgling over with psychosis and sticky glops of camp, the bashin' about on some punk rock blues in tracks like "Be Home Before Dark" with it's hissing back up vocals seeming more like catty taunts, the spun way too tight boogie that's "Too Cute" and the reverberated head stomp that "Popping Bubbles" puts down resemble the Oblivians after spending a week hanging out with Japanese noise rock bands.
At other times, such as squeeze box flourished chewy bop bouncer "What's Inside Your Lunchbox", the way the guitar on "Toy Gun" swirls like a thrash riff swimming in a birthday cake flavored vodka stupor and the B52s if they dug proto-metal more than surf music vibe on "Life's A Drag Queen", it's something like they're an AmRep band sustaining on a diet of cotton candy.
Probably knowing all too well what goes on at the sideshow after the carnival closes for the evening, Mr. Clit & the Pink Cigarettes make a filth coated cacophony that has rats thinking twice before they go sniffing around the sewer these sounds spill into.
Wet-Willy is going to spend at least a good few months in my "GET DRUNK AND PLAY LOUD" pile.
https://mrclitandthepinkcigarettes.bandcamp.com
Posted by Dale Merrill