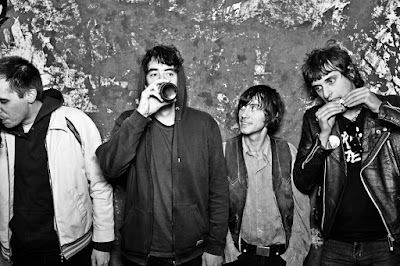 Bands have emulatin' and celebratin' the laid back sleaze vibe of late 60s/early 70s Rolling Stones since, well, the Stones starting doing it. To name all the combos that have wondered what it would be like to hang out at Nellcôte and have the job of being chief doobie roller for Keith Richards and Gram Parsons would be a daunting task though. So for time's sake let's just say that Berlin, Germany's Bikes, for one side of this record at least, have scrawled their name on the list.
"Two Mice" hazy chugs moves like the band is having a breakfast of fried chicken with a side of Chuck Berry and cocaine. It's a shabby countryfied blues groove has a certain sway but is tempered to keep from breaking too much of a sweat. If these guys ever visit New York City, they'll go on a hunt for those Puerto Rican girls they heard Mick Jagger banging on about that are dying to meet just so they can see if they really do bring a case of wine with them.
The flip's "P.P.O.D." turns the fuzz knob up a bit, stomps the floor a bit stirs some drinks that's is ingredient thick on the Last's "L.A. Explosion" album and the first couple of Black Lips singles.
www.aliensnatch.de
Posted by Dale Merrill