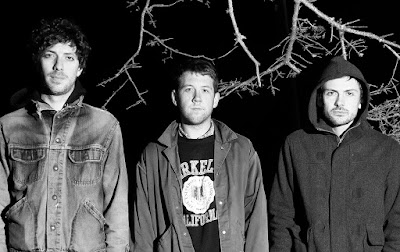 If a band ever had play dates as children in a coven it's most likely that Toronto's Crosss is that band.
Sure, dark and thick guitar riffs that bounce between buzzing like a forest full of cicadas on the hottest of summer days or roll in like front a cold drizzle and slow but battering wind rattling a loose tin roof. A nasally and haunted voice that resembles an imp working on croons and the rhythm section punctuates it all with a leaded dark sludge all over the place. With that said though seems to be a naiveté in their gloom. One that makes their sound less pompous and more tenable in the moods they are setting.
On tracks like the albums opener, the writhing and twitchy shadows casting "Interlocutor", the awakening of a grumpy giant vibe on "Golden Hearth"and the feeling of hot lava rolling down from a volcano to plow the village below that's "My Body", it's not like the band is trying to make the listener believe they are warlocks standing on a mountain peaks of purple and hairy buds where they keep fire breathing, huge horned argali as pets and have a stock pile of thunder stored in caves. What is believable though would be that after drinking the Robitussin they were using as bong water while toking down in a damp basement, they took a walk through a muddy woods at midnight and stumbled across something really spooky and disturbing.
While gut rumbling fuzz is something that these guys deal with in bulk, they seem to know that even hemlock need UV rays to grow. A little bit of sunlight are let in through the dark clouds on "Mind" (which resembles Ty Segal not winking as much on one of his death trip rides.) There's also the acoustic creepy crawling "Dance Down" where one wonders if Vincent Price was still alive would he show up to drop a couple lines in the middle song.
Crosss do manage to keep the songs economical. They average around 3 minutes each and don't waste a whole lot of time on way too long Nuge on Quaaludes solos. This stays true to til the end. That's when the 18 minute "Enthroning the 4 Acts" closes out things. Even then though, the band seems to be channeling noise bands after being asked to compose a new soundtrack for Nosferatu instead of trying to make people think Earth's Sub Pop albums.
www.facebook.com/crossscrosss
Posted by Dale Merrill