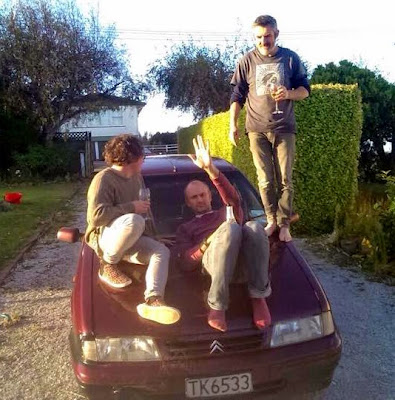 Back in my high school days calling someone a trendy was a blanket slam of disdain on the rich kids, the cheerleaders and anyone else that was deemed a follower or simply late to the game. Y'know, what they called in movies (though we never used the term much if at all) the Soshes.
Us punk rockers urchins and new wave misfits did our what we could to avoid them. For the most part it was easy. We weren't invited to their parties and they kept out of the video arcade we claimed our turf in this small town.
With vocals that sound flailing about like Mark E. Smith with his hair on fire while some guys re-imagine what Mordecai's College Rock album would sound like if they attempted to be Flipper taking a stab at doing pop songs on circular saws, New Zealand’s Trendees probably aren't getting invited to many rich kids pool parties.
Right from go, "Power Waves", guitars caked in mud blare a feedback infested squall and drums that sound firecrackers shut inside an armored car go bang. From there uncontrollable musical spams herk, jerk and pant through cyclones of introspection like "Boring Party", rants while pissing on an electrical fence for "Small Town/Dressing Gown", drops acid at dawn on "Center Of Town" and "Concorde #3" so they can wait for a bad trip to happen and, for "Motorcycle (Make Loud Noise)", take the term Biker Rock way more literately than most by sounding like they are living right inside the tail pipe.
thetrendees.bandcamp.com
Posted by Dale Merrill

Email ThisBlogThis!Share to TwitterShare to FacebookShare to Pinterest
Labels: new zealand, self released