SUGAR STEMS "Only Come Out At Night" LP

When it comes to perfecting the “summer for soundtrack” album bands from the Great Lakes states seem to have a knack for it.
Personally living in the area for ages my guess is that it has something to do an appreciation of the season and making the most of it. All Great Lakes dwellers know that the cold, blustery and, especially when taking last winter into consideration, brutal weather will take hold and the sun will be hidden being a thick mass of greyness for what may end up being 2/3rd’s of the year. The warm breezes, riding to the beach with the windows down and the smell of barbeque and the events that surround them, be it sublime or bittersweet, are to be reminisced and/or looked forward to again even if they may stir memories both bad as well as good. 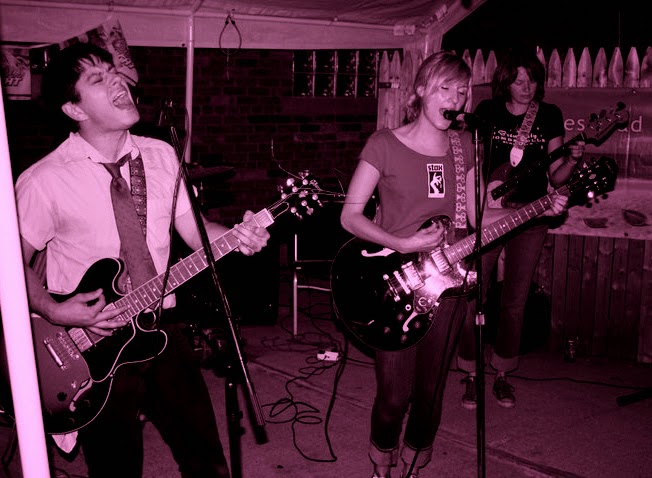 What better way to do so then set it to music, right?
The album's opener, the wall of sound drenched "Baby Teeth", hits the girl group gone new wave thing that Blondie did so well to a point where one may be searching the record's liner notes to see if it's an outtake from Plastic Letters.
There is a lot more going on though that straight up Debbie Harry and the band she fronted worship going on here though.
For instance, opposed to a lot of the current crop of "Blondie influenced bands" where the singers sound like they're making their voice resemble sour apple candy and a cocaine drain while the band is shadowy illuminated by dingy street lamps, Sugar Stems Betsy singing veers towards raw honey treated husky wail on the pristine pop of "Tell The Truth" and the album's title track.
On others like sparkling fizz of "Some Might Say", the garage rock stomp on "Run Rabbit Run" and the almost baroque closing acoustic closer "Million Miles" she puts down real classic down home drawl and soar that the vocal equivalent a Hostess Twinkie (y'know, all fluff and no natural ingredients) current crop of dirt road pop startlets on country radio can't pull off no matter how much affected twang and autotune their producers pile on.
Add in the rhythm section of Stef on bass and Jon E on drums firing on all pistons, lead guitarist Drew's flashy (without ever being long-winded or gaudy) solos and newest member Andy ebullient keyboard lines to the confection and even your dentist will be understanding about the newest cavities you have.
www.sugarstems.com
Posted by Dale Merrill