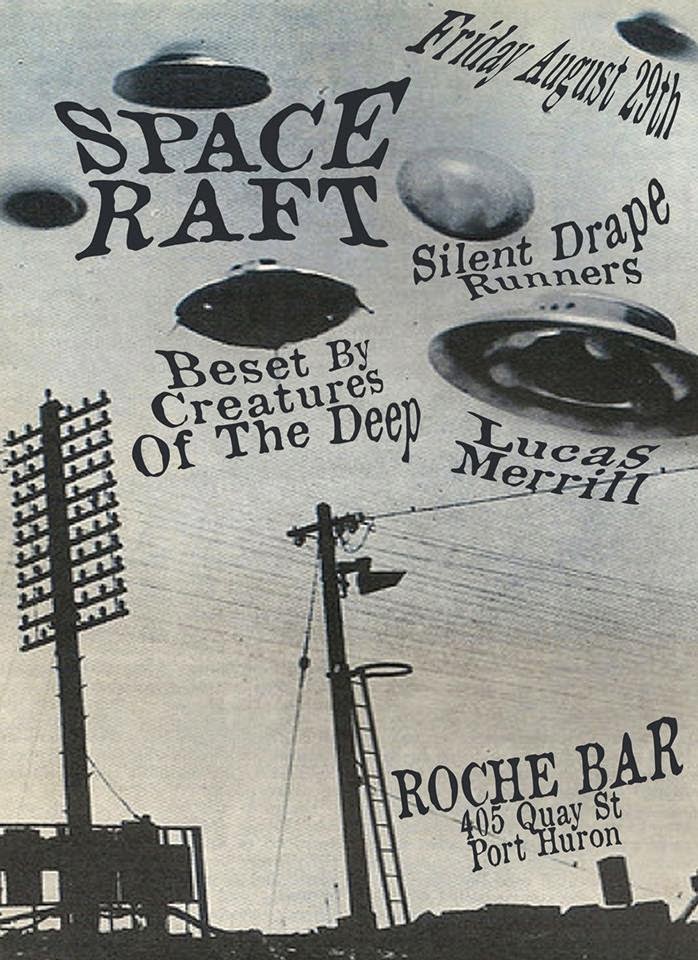 Space Raft does not need a laser light show. Sure, it would be cool if they had some. People could feel like they were floating in a galaxy while the band played on. The thing is though these guy don't need special effects to get the songs across.
Fronted by Jordan B. Davis, who first arrived on the rock-n-roll scene in the early 00's as the guitar player of the Green Bay, Wisconsin band the Mystery Girls. Combining the roar of 60's proto-punk bands such as the MC5, the Stooges and Radio Birdman with the prime bloozy grooves of the Rolling Stones and giving it all a exuberant garage rock kick, the Mystery Girls released three albums and a handful of 7inch singles (including one on yours truly's label Bancroft Records) before packing in it. Jordan then spent some time in Montreal, learning French and mastering the art of poutine making before returning back to the land where the truly, actually, really happy cows live (Take THAT, California!) and forming this combo.
Like the Mystery Girls, Space Raft do look to the past to make a sound for today. Where the former though was mining a '65-68 teenage howlin' with a tinge of weed and a drop or two of LSD, the latter borrows a bit from the end of the 60's to the mid 70's sound-wise without sounding like some band that's entire knowledge of classic rock is just the bullshit 200 songs that classic rock radio seems to think are the only ones that ever existed.
Driven by choppy chords, the opener "Never Enough", along with swaying side to side descending grooves of "We Are Not Alone", the bittersweetness of "Evening Glow" and the driving down the highway with the windows down sparkle of "Rescue Mission" bask in a glow of Big Star fishing at night on a river on the moon (or something akin to hits an alternate universe where ABBA and the Carpenters didn't dominate the AM radio airwaves of the world but Todd Rundgren, up until "A Wizard, a True Star" at least, is a household name and Wally Bryson gets name checked much more often than Eric Carmen when discussing the Raspberries) while still being firmly placed in the now.
The above description is fitting for all the songs on the album in their overall approach. Scratching the surface though things like Traffic sans the dudes wearing kaftans lounging around on lumpy hemp rope macrame hammocks and the long ass jazzbo jam session sections runs a thread through electric piano accented "Waves Of Frustration" organ ooze and George Harrison's All Things Must Past parred down to one solid album and the Nag Champa aroma being replaced with the smells of a backyard barbeque on "Venus In Transit." The band even tosses in a bit of a Madchaster psychedelic dance party for good measure on "Anything Is Possible"
If I said this hasn't been the album I've been playing when heading to the beach this summer I'd be lying. Speaking of summer, Space Raft, along with Beset By Creatures Of The Deep, Silent Drape Runners and Lucas Merrill will be closing out the summer with a show on Friday, August 29th at the Roche Bar in Port Huron.
www.dustymedical.com
Bachelor Dusty Medical LP Wisconsin