January 12, 2014
How do spacemen crash to earth and not be detected?
Especially when it sounds like the spaceship they arrived in was made of very tossed away cassette deck parts & discarded reels of of really low budget 60's sci-fi films and rattles louder than an old pick-up truck with no muffler and rusted out box panels. 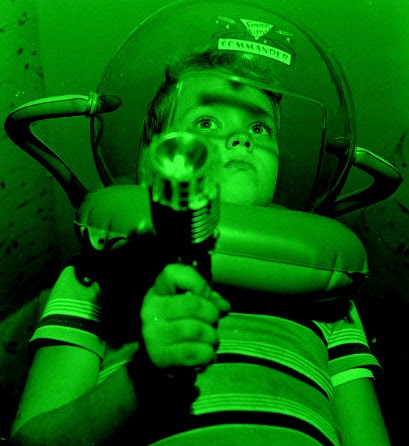 Featuring ex-Detonations and Static Static folks and resembling something akin to deep down south and rusty razor blade toting bastard offspring of intergalactic guitar feedback noise humpers that proceeded them in decades past-the two songs here are not like painting a room midnight blue and pasting glow in the dark stars, moons and planets all over the walls. Instead, they are like lightning flashes or chemical flares as the songs go straight to dishing out parts of the frontal lobe with a spoon and then onto probing other orifices.
Creepy organ blow out a noxious green fog that covers the ground, electric shock guitar send a billion watts of paralyzing jolts down the spine and singing that doesn't sound like it's going to ask you to take them to you leader but is going to demand to know where the nearest power plant is.
pelicanpowwowrecords.bigcartel.com
7inch Louisiana Pelican Pow Wow