Whatever happened to the brutha as a rock-n-rolla?
I'm not talking the calculated bullshit "I don't care what people think as long as every move I make gets me the gossip headlines and trending on Twitter" things that Kanye West does so he can declare himself a rock star in those very same gossip rags.
Declaring yourself a rock star doesn't not equate a rock-n-rolla. 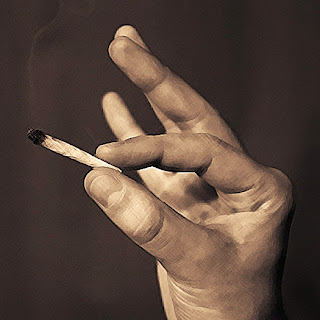 I am talking about a brutha that actually does not give a fuck but other than rocking out when it is called for. One that isn't doing what he does in hopes that Entertainment Weekly will declare a genius because everything else they had to review for the week was albums from TV talent show winners or adult contemporary artists disguised as a modern county entertainers. One that is out to blow out eardrums as well as minds. One that is actually playing something that is loud, obnoxious and, yep, punk rock music instead of just wearing some goofy shades so the pop press can mention a nod to "punk rock style" the dude is sporting while walking down the red carpet at an awards show.
Being declared a rock-n-rolla is something that is bestowed on someone. Described in a recent article/interview in Consequence Of Sound as "the only black 41-year-old single father DIY garage rock drummer/singer from Cleveland" the brutha behind Obnox, Lamont "Bim" Thomas, is a #1 Rock-n-Rolla, and has been for many years with his time behind the drum kit in bands such as Bassholes and This Moment In Black History.
While those bands had him working within what others may have had in mind-Obnox is his own deal. A loud, thick, abrasive thing of beauty deal the mashes many different worlds of sound but doesn't sound like some mutli-culti NPR bullshit at that.
Like Chrome's Half Machine Lip Moves wound way to tight riding a spaceship through some urban wasteland inhabited Spector Wall of Sound zombies and the best weed punk rockers can never afford growing wild through sidewalk cracks-the album wastes no time taking a hammer to the eardrum and making blood rush to the head with opener "By Myself". This initial blast off helps propel other feasts of burning noise filled with dangerous fumes such as it's follow up, the sex jam in the middle of a fire-fight basher "(I Want To) Fuck You Like A Puma".
Cop era Swans discover the blues after meeting some street preachin' rapper who's so underground his address is a sewer who's idea of a beat is a locked groove is the best to describe hypnotically woozy rhythm that Bim busts some rhymes over on the lolloping glitched soul of "Deep In The Dusk" and the mangled street beat/shout out to the hometown harsh out hip-hop that's "Being Cleveland". The latter is not the only bit of local pride/contempt either as Obnox also out noises the Cheater Slicks at their own game on his take on their "Ghost" and his revisiting his past with a version of the Bassholes "Swimming Bues".
The magic of hypnotism through bleats of guitar feedback get worked over on the soul falsetto being abused by dentist drills on the take of Tom Waits "Way Down In A Hole" and pleading for love (or most likely and, simply a piece of pussy) "Home".  The pleading is given the same treatment again and then run through the ringer once more on the rudest take one will probably ever hear of the Eddie Floyd song "Good Love/Bad Love".
It's highly doubtful that TMZ will ever be falling over themselves to document ever off the wall ass thing Bim might ever blather when paparazzi and press corps are around and it's hardly unlikely that MTV will be calling saving a seat at their stupid awards shows (especially after they hear about him lighting up a joint at a college radio station and then getting kicked out of the studio) but he is a for real Rock-n-Roll brutha and Corrupt Free Enterprise is all the proof one needs.
http://12xu.net/