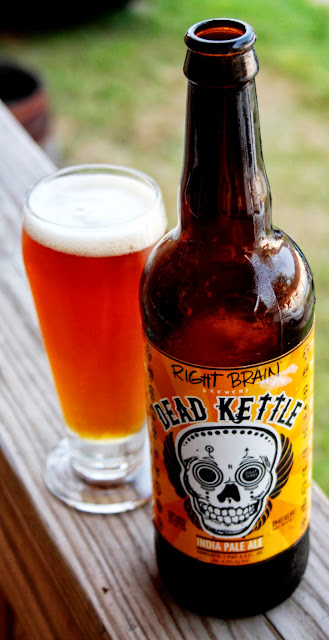 India Pale Ale. I've tasted well more than my share in the many years now I have been drinking beer. They are usually my go to when trying a brewery I have never tasted before too.This especially rings true for any Michigan beer maker with me. The state seems to have set it's own standard or style for the way they are made and the way they taste.
Though Traverse City's Right Brain has been around for awhile and has been bottling things for a bit now-their stuff is not normally seen in my little portion of the state. I have had a little sip of some of the things they have made that were not an IPA courtesy of some friend here and there but my first time to pick a bottle of the stuff for me to sit down, examine and do the beer geek thing didn't happen til this weekend when I was an other part of the state and scanning the shelves.
Naturally I went for the IPA.
Dead Kettle pours a color between egg yolk orange and new penny copper. It's off white head grows a little at first the slowly melts to a 3mm head that stays constant throughout the sipping. The aroma is split down the middle between buttery & caramel malts and lime tinged hops. Neither seems dominate and they work well together.
On the first sip the thing that sticks out in my mind is the texture of the brew. Though bubbles are floating all around in the glass it seems slightly thick fluff feeling in the mouth. A citrus zest, aforementioned the lime along with MICHIGAN peaches (because, yes, we do grow peaches here and they do have their own distinctive sweet-tart thing going on) and something that gets me thinking raspberry candy) is the first thing to strike the palate. A lot of Michigan IPA's tend to have an overly aggressive hop forward attitude that can beat up the tastebuds in the most awesome way possible but this one it's a obviously flirty but not mauling the tongue and mouth. It's followed by flavors of toasted wheat bread with honey and caramel covered Granny Smith apples. The finish is somewhat dry with a linger of white pepper and orange peel.
Due to these days where it seems like everybody and their brother, mother and dad are dabbling in making the IPA to give them their flagship distinctiveness I declared myself bored of the saturation of them and have told my beer drinking cohorts "Anything but an IPA for the next 6 months."
Obviously that hasn't happened and it's ones like Right Brain's Dead Kettle IPA that reel me right back in no matter how many times I declare my personal moratorium on the style. It's near perfect in it's balance and, with a lighter abv than some of the other Michigan IPA's (5.5%), one that could be a weekend long session without getting tired of it.
www.rightbrainbrewery.com
Posted by Dale Merrill