What do members of band's that had records on the In The Red label do when their groups call it a day? Well, if it's Matt of the Mystery Girls and the Demon's Claws Ysael (along with a couple Romanian malcontents and occasional contributions of another In The Red alumni, Greg from the Strange Boys) it's put a new combo together. 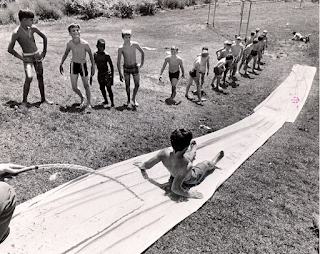 A boozy, backwoods pace that is equally some twisted folk rock jangle, a day at the beach pop music and absolutely frayed around the edges garage rock thing that both the 'Girls and 'Claws did so well when they were nailing live is what it's about here.
Sounding a bit like later period Byrds with not all the facial hair and a less dour disposition meets the Velvet Underground's 3rd album wrapped in flannel (not because they are waiting for grunge to return but are simply hayseeds) and barefoot, "Mirror Maze" is like an ice cream cone on a hot day. Cool and creamy but all sticky as it melts all over your hand. Boozy back up vocals and few seconds of sax blurt dropped in as a solo toward the end complete the slacking off on a summer day feeling.
The flipside's "Beth's PA" features the sax making Canadian goose honks at the start along with dripping wet with moisture guitar licks snake in and out over a foundation of what sounds like a stoned country rock band standing on the verge of doing a freakbeat rave up.
Kevin from Dusty Medical Records mentioned to me that he has already put this on a couple mixtapes then noting he doesn't ever really even make mixtapes anymore. I still do from time to time (and if you want to count the radio show I do I guess technically I make one every week) and both of these songs are going to go on all of them throughout this upcoming July and August.
http://tangsoleil.angelfire.com/
Posted by Dale Merrill