Back in my 1980's high school days I could not stand Deep Purple. Maybe it was because the grits, with their teenage teeth already ravaged Mountain Dew and Marlboro Lights world get excited one of their songs would come on in shop class, yell "It's Blackmore, bro!" and then crank the crappy classroom stereo up to where even if I thought the tune was good it ended up just be a mass of "BLLLUUURRRPPPP!!!" instead of banshee wails and bong as an echo chamber organs. 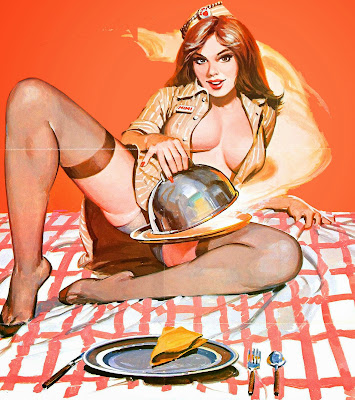 As the time went on, and while looking for different (musical) kicks and working in record stores eventually my paths with "THE PURP, maaaan!" would cross again. Punk rock had gotten slower, what people ended up calling Grunge started bubbling to the surface and there were always a few copies of In Rock, Fireball and Machine Head in the dollar bin. After spending a weekend with them I realized, that for of all Blackmore's mystical and then blatant AOR bullcrap he was always pulling off in the 80's with Rainbow, those three albums kicked all kinds of ass with it's lunk-headed lyrics and blown out boogie.
It sounds as if these San Fransisco dudes have spent their time listening to that holy triad of Deep Purple records too along with massive doses of the necessary Black Sabbath (because you can't actually do any bong rattling rockin' without it no matter how many ice cubes you have in it without spending many a toasted afternoon Masters Of Reality and Paranoid cranking out), Iggy and the Stooges Raw Power, Ace Frehley's  KISS solo album, Thin Lizzy here and there and other things skateboard rats listened to while gobbling down a handful of White Crosses and Yellow Jackets before punk rock came along.
Tracks like "Handy Denny", "Killer Smile" and "Tragedy Prevention" are hard driving/Head out to the highway jams full of fuzz bass, distorto butt shaking/hair flipping guitar licks, and a drummer that knows how to pound the kit yet still swing all topped with a brown weed toking bellow.
It's not all drinking warm beer and watching some California sunset though a windshield of a muscle car affair though as "Lady Of The Lake" and "Gold Lyre" brings out the darker side of late period psychedelia and "Ripped At The Seams" finds that sweet spot between proto-doom and Black Flag's Loose Nut. http://whocanyoutrustrec.wordpress.com/

Email ThisBlogThis!Share to TwitterShare to FacebookShare to Pinterest
Labels: California, LP, Who Can You Trust