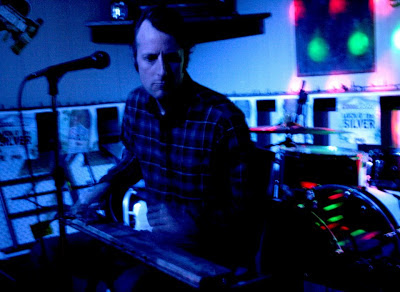 The past half decade or so here has been part of the bands the Readies and, his latest thing the Darleens, but he's also been out there doing gigs as a sit down in a chair solo act. With his home made diddley bow, an ancient mail order looking guitar that may be kept together with wood glue, horseshoe nails and sheer good luck, a kazoo and whatever else he may bring in a small suitcase smelling musty and of mothballs-Dan pulls up a chair, introduces himself, perhaps tries to crack a joke and then spins his take on the old, weird, scary and righteous world of music that made "America".
Consisting of songs that have long fallen into the public domain and, according the the liner notes on the back sleeve of this one-sided 12inch, recorded on a cell phone (which, in it's way, is the modern ages cassette deck with a condenser mic)-the seven tracks here take the oodles of primitiveness, unplug from electricity and strip back to simple instrumentation and, in once case, no instruments at all other than the human voice.
Two of the five tracks are instrumental. The first one, "Rolling &Tumblin'" starts of the slab with something that sounds like the kind of blues snake charmers would play amid some major chaos at an Egyptian street market. Unearthly yet totally natural and of the earth. The other non-vocal track on this record is a faithful take of the country blues standard "K.C. Blues" with Dan doing top ace guitar picking abounds.
"Angels Watching Over Me" finds him unaccompanied; his voice alternating between a lady at church feeling the gospel in a belting vibrato spirit and grunts & shouts like a carnival barker. His take Kid Bailey's (or Willie Brown with Charlie Patton on 2nd guitar as many a pre-war blues habitué believe) song of never settling down, "Rowdy Blues", is all about gnarled fingers banjo picking and sitting on the back porch on a humid night like tonight and letting the neighbors know that the evening is just getting underway.
Something sounding like a ghostly sitar adds something quite sinister feeling to his take on the Appalachian standard "Pretty Little Pink" and we get taken back to church circa somewhere between the Dustbowl, the Great Depression and the Delta to think about death and redemption with "Before This Time Next Year."
The record closes with "Run Little Children" which works up a whirling dervish of bizarre snaky slider guitar notes, Ozark harp and murmuring chants.
I am sure that if I was to play this to a particular crowd of honky "blues" musicians and jam band folkies around this town they would probably say it is not the blues because there's no SRV sustained note jacking off or that Jerry Garcia would have recorded it better. To me that means that Kroha hits the real thing straight on target.
http://socialmusicrecords.com/
Posted by Dale Merrill