Some months back I got involved with Facebook discussion amongst some Wisconsin music acquaintances  concerning the merits of Crappy Dracula. A huge basis of the conversation seemed to be questioning if the band even took making making music seriously yet themselves. First off, with a name like Crappy Dracula it would seem kind of obvious that the band isn't striving to be some deep thinking prog rock or something but it was like that part was lost on some in the debate. 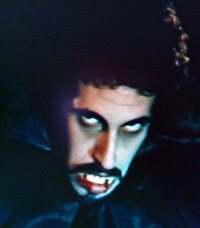 Having only seen the band once (so far) when they came through Michigan it was a set of laughs and just as much bewilderment. On stage a little guy who looks like Ernie the Muppet wearing glasses and a guitar played who's brother may be a star on the basketball team but for himself is most likely declared the king of of the AV club if not for any other reason he has over 1000 hours of 80's porn VHS's the he has been uploading to all the free sites and won the contest of making the loudest fart sound underneath BOTH armpits. Behind them a hippie/hesher drummer who hopes someone at the show will smoke a joint with him afterwards but knows the chances are slim as he it is his job to single the other two when the songs are suppose to start and end even though they never really pay attention to him. Their set seemed more about returning the heckles they invite from the crowd (and they are really funny at it) if simply for the reason to chew up time and not have to play as many songs. It really irks those who are in the crowd there to rock out or to bop their head while taking in some musical godhead experience.
A lot of people leave thinking "Crappy Dracula really live up to their name. Ugh!" C'mon though-what did they really expect. It is also what makes them the best at the dumbness they do.
Short songs about the ghost from Three Men and Baby (????) and Bill Cosby's ghost from Ghost Dad coming to get you, taking the stairway to heaven (which is only 29 steps) because the escalator is full and giving step by step of instructions of how to build muscles by guys who probably had towels snapped on every part of their body during gym class showers done in a way that makes the Dead Milkmen sound like deep thinkers who were striving to emulate Yes.
Crappy Dracula's musical indulgences are not about transcending the mind to some higher plane through notes and sound. They also don't seem to be deliberately trying to deconstruct modern music by reducing it to a clumsy thud as they put that across in a way that seems effortless.
I wear a Crappy Dracula button on my leather jacket with pride. When people ask what they are all about I respond "You probably would get it." I am not saying it in a snobbish or elitist way either.
Crappy Dracula on Facebook
Posted by Dale Merrill