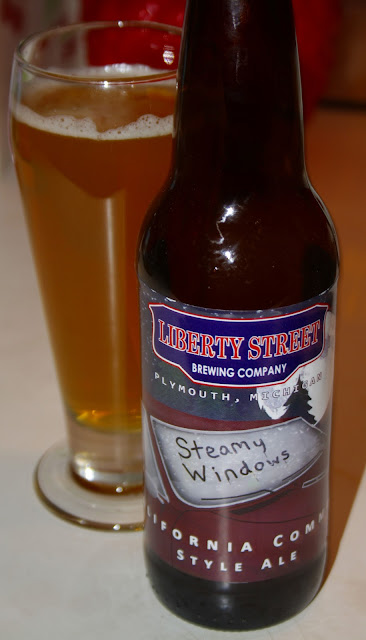 The only other California Common/Steam Beer I have had any experience with is Anchor Steam which is the grandaddy of the style as well as, along with Sierra Nevada and the Bell's line were my gateways to the land of GOOD American beers many years ago now, so it would be the only thing I would be able to compare it too. It's been a long time though since I have had an Anchor Steam though. Not because I wouldn't drink one but shelf space is at premium at the places that sell GOOD beer in these parts so it has seemed to be bump out by all the many others that are always becoming available.
Since this is a case of me not having an Anchor Steam fresh enough in my mind to make a mental comparison I can only judge this just recently started bottling Michigan brewery ale on it's own merits.
Pours a slightly hazy amber in color with a light smooth head that melts fairly quickly with a slight bit of lace let behind. The aroma is light but notes of buttered biscuits and honey do waft their way to the nose.
A noticeable bit of lemon peel is the first thing to come out in the flavor. A bit tart but not a stinger. Nice though. That gives way to bit of apple crispness in the middle. It finishes with a bit of peppercorn tying everything together.
All-n-all this reminded me of something that could fit in lighter end of the pale ale scale. Not overtly complex but enough of it's got enough interesting characteristics to hold it's own and would fit with many different food pairing as well as quite sessionable on it's own.
www.libertystreetbeer.com
Posted by Dale Merrill