"We set out to make a ridiculous, pretty pop record" is what thee Makeout Party bassist Lee Noise told me about their first album Play Pretend.
And they succeeded. Attempts to make a 2nd album though did not work out much though. While the former was adorned with lots of glitter, the latter was put together in a garage putting a bit of gritty dust in the brightly flavored bubble gum snap the band had been known for. 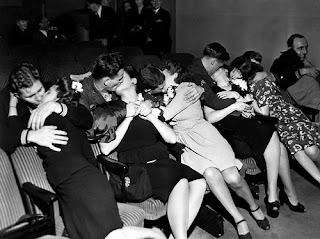 Disagreements in the direction the songs should go and the usual band strife led to a unfinished halt of the recordings and what was left got shelved unmastered, unmixed and unadorned. Well, until these two tracks surfaced on Austrian label Bachelor after Makeout Party dude Dan decided the world should be able to give them listen in all their semi undressed glory. This even extends to the cover art of the record itself which is a black-n-white drawing with a box of crayons included with it so the listener and DIY the artwork in their own color choices.
Written about the Disney Adventureland ride "Jungle Cruise" (where Makeout Dan worked at for a bit) is like a song from Beach Party movie minus the production trappings to appeal to those from the age of six to sixty. It's all about the pure fun of the cheesy attraction though sounds a bit woozy in parts. Perhaps from being a little seasick from the ride maybe?
The flip's "Bittersweet Bubblegum" is about the struggles of writing a song that will get all the kids to sing along. Anyone who has been in such a situation knows that doing such a thing is not as easy as it looks and has probably driven people to the madhouse laboring over it. Sounding like a frustrated Phil Seymour attempting to show a way boozy Big Star the song they are gonna play at the talent show later the same day.
I have read that other tracks from these session are floating around on cassette as well as the internet. I have not located them yet but if these two songs are anything to go on I will be seeking them out.
http://www.bachelorrecords.com
Posted by Dale Merrill