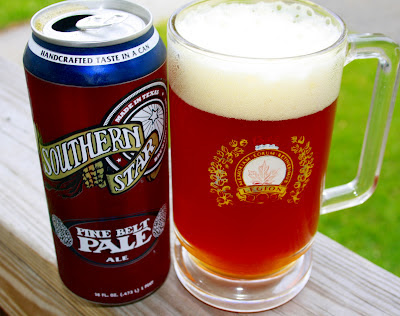 "YOU DON'T PUT CRAFT BEER IN CANS."
I have heard that said many times now. Sure, the belief of such is a legit one. When a person thinks of canned beer they think of beer gutted old guys knocking back clear yellow, adjunct grained, light lagers while yelling at the TV, their kids, their wives and et cetera.
They think of shotgunning tons at underaged parties, puking their guts out and then getting grounded, or worse, by their folks the next day.
Most beer snobs will think of many, many things when it comes to brews in a can but usually not "Oh man! That stuff is so awesome."
Over the last few years though some breweries have been doing their best to change that assumption. Oskar Blues in Colorado comes to mind instantly though there are others that can be mentioned of course. Another one that be added to the list is Southern Star Brewing out of Conroe, Texas.
Cloudy clover honey in color and a thick and creamy head that hangs tight for awhile until melting into sticky film lacing the glass sight along this is not some old guy beer that the corner store always makes sure it has lots of stock on when the social security and pension checks come in.
The beers name rings true in the aroma as the hops waft with a morning walk through the pine woods scent. It's not a jump out at you kind of bouquet but is obvious as it mixes with a smell of fresh baked biscuits from the strong malt backbone.
On first sip the malts are the first thing the tastebuds notice. A bit of toast and caramel first are then followed by a tartness that of green apple and mango. Interestingly enough though is like how the piney hop nuances where floating around in the scent of this modestly carbonated, medium mouthfeel brew but not glaring is also how they come out in the flavor. They wait to almost the finish to make their presence known bringing out some pepper and spice that becomes more pronounced with each sip. It then ends with crisp and clean with the sour fruit undertones that were noticed in the middle.
Say what you want about beer in a can but the stigma's about it sure get a bad rap at times when it comes to companies putting things with interesting complexities such as this brew in them. Can's are just a storage and shipping vessel anyway. Pour it into a glass to drink it. While you are at it-grab and pour me another one of these too. Good stuff.
http://www.southernstarbrewery.com/
Posted by Dale Merrill