May 08, 2012
Mention that Memphis, Tn.'s Alicja Trout was a New Wave archeologist in the Clears, a duet partner with Jack Oblivian, post-punk murk maker in the Fitts, the attitude enhancer/foil to Jay Reatard in the Lost Sounds and hard rockin' lady in the River City Tanlines and you aren't even coming coming close to scratching the surface to mentioning the contributions she has has made to make record collections around the world grow. 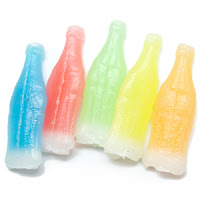 Do we need to mention Mouse Rocket? Nervous Patterns? Black Sunday? Her label Contaminated Records?  Etc. Etc. Etc?
Getting the gist, right? She is always up to something worth taking an earful of.
A couple years back she released her first single under the alias Alicja Pop! She was a new mama (as in having a kid-not the rock-n-roll sense of the term-though she is that as well) and the first record of songs she released under the name, a 7inch called Shining Apple, had a bit of a Krautrock goes, well, a kiddie music feeling to them.
While the pop on the previous record under this nom de plume as a bit whismy and bright version of "POP!"-here there are several more weird long shadows and shades of darkness.  Synth sounds hum behind simple rhythm patterns while guitar slash at time and at others blurry. Over top of it all is Alicja's voice, multilayered and melodic, adding fire and ice dimensions to the listening experience. Think the Cars Panorama album meets that Bangles EP that had "Mary Street" on it.
http://www.certifiedprrecords.com/
7inch Certified PR Tennessee