"Wiggly Indie-Rock that is quite astute to the craft of constructing a great pop song."
It's not uncommon to see something of the same effect as above in the blogosphere describing a myriad of bands out there. They release a clever and catchy debut that ear worms many and has them anticipating future sounds by the band in question. Problem is though a lot of those bands put their eggs all in one basket or shoot their entire load the first time around to as where their follow up seem just a revisiting of everything that they've already done with no expansion or they change their idea/approach so much that they lose what charmed listeners in the first place. 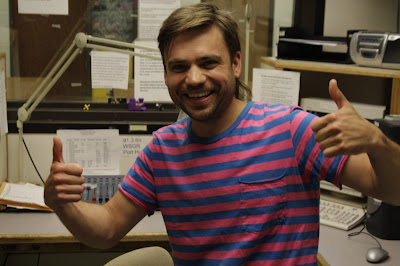 Sarnia, Ontario based trio of the brothers Giresi (Mike, Matt and Marcus), The Chocolate Robots, recently released their second full length, Pizza Face, and with it have cast any worried of the dreaded sophomore slump aside. Their first album, Purr Quality, seemed geared for both the head as well as the dancefloor (the mechanical rock of Brainiac, Girls Against Boys and Servotron rubbing up against those late period T. Rex albums and 60's bubblegum came to mind at moments). This new one aims an brightly colored arrow straight for the heart and lands a direct bullseye.
Recorded in their basement on (mostly) analog equipment that was left over from their dad's days of recording Canadian-Italiano pop music in the 70's-Pizza Face, an homage/dedication to their straight gig of working at their family's pizzeria (and because, well, we all know how pizza and rock music go hand in hand not to mention the only pizza place I know who uses songs by Personal and the Pizzas for their on hold music), is like ordering like a pie with the supreme toppings. Where the results could be overwhelming in some other hands though all the little nuances from sweet to spicy and textures from crispy to gooey come out and enthuse the flavor receptors here.
The warm, fuzzy and, thankfully. lacking too much pro-tooled post production tricks that turns a lot of like-minded projects into a piece of plastic coated mush recording cradles sleepy eyed but smiling singing, rubbery and twinkling guitars, door knock and disco beat drums, thick bass and more squiggly & elastic keyboard sounds that should sound very out of place but somehow work since the last time Devo made a really good record.
The heyday of AM radio sunshine sound and Brian Eno's pop star phase (Y'know Here Comes The Warm Jets, Taking Tiger Mountain (By Strategy) and so on) meld into the modern post whatever they call in now melodicism of bands such as the Pixies and the Strokes shine brightly not only on the should be an international sensation (which technically it is if you're take in the Port Huron and Sarnia are international neighbors) "Young Love" but also on songs such as the robots are playing slide whistle squiggliness of "Impossible Princess", "Line" with it's "I can't dance all that good but I sure try" feeling, the sugarbuzz pusher at the small town summer parade "Cotton Candy" and the long walk to think about stuff because it's a nice day mood of "Soul Shoes".
A childlike whimsy runs though the record and like children they aren't afraid to get all noisy as the Creation frolic with Phil Spector's tape machine "Funny Feeling" and "Ratical Power" which sounds like Hawkwind if they were picked to do an episode of Yo Gabba Gabba prove.
Round out the album with a couple of citrus soda neo-psychedelia tracks like the Brian Wilson if he was asked to produce Roxy Music (they we go again with that Eno thing I guess) mood that is going on with "Dumb Angel" and you have a POP album your much cooler than thou pals won't scoff if they see it sitting out in the front of the record stack.
http://www.chocolaterobots.com/