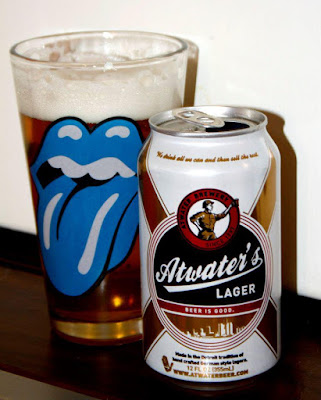 Lager. Because of all the bastardized and bland rice/cornwater that brewing monoliths have pushed on the people for so many years now-trying to convince your usual beer geek to try one out is the same as trying to convince a serious foodie that a drive though restaurant chain that advertising every at least every 20 minutes on every TV and radio station is making a top of the line gourmet burger.
It's totally understandable too. I wear my beer geek badge proudly and as a somewhat foodie too-every time I've tried some new meat sandwich a burger chain is trotting out to the buying public always has me saying "It's like a weak processed version of the one I had at (fill in blank of a locally owned place that makes a far stellar burger...and makes them with care and one at time). So, when a new lager is introduced, even it's by a little guy brewer, it may get overlooked or purchased as a novelty or gag gift.
Personally, I have never been impressed with anything from Detroit's based Atwater Brewing Company before. Drinking a few at their brewpub is decent but anytime I've tried anything they've made out of a bottle something is serious awry be it the taste or some ridiculous carbonation where each and every bottle fizzed like mad and half the beer is wasted even before it is even tasted. The latter happened every time I gave an Atwater "another chance" over five or six times over a year so it just wasn't a one time occurrence.
A few weeks ago though I was getting together some friends to see what kind of noise we could make together on our instruments in a basement. The three of us are beer snobs but being on a very tight budget personally and slamming & quaffing brews straight from it's vessel is always more conducive in jam session situations than pouring it into a glass and sipping. Besides, we're playing at loud volume, and though breaking glass is punk rock, it was figured there would be less clean up mess if any cans rattled off the top of the amps from vibration and crashed to the floor than glass. The store, which is one of the main places I go in town for both selection AND price, had some 12 packs of cans of Atwater's Lager on the shelf. I liked the way the designed looked in it's white, gold, black and red colors. Reminded me of the old Stroh's design (back when it was still brewed in Detroit) or one of the other "old guys" beers me and friends of mine would sneak out of our grandparent's garage fridges back when we were teenagers. It's price point was nice too as it was cheaper than Bud and what have you. Seemed like though even if wasn't the most awesome, ultimate choice it would at least serve the purpose and had to at least have some more flavor than Busch or some other cheap swag.

It ended up being a hit. Enough so where we went and bought more of it because the first 12 went down really fast. I ended up hiding one can in my guitar case so I could take it home to pour on into a glass and give it a little more thorough of an investigation.
Translucent and gold in color as always expected from any lager but a bit more shiny and bright in it's color than most macro's of the same sort. A strong two fingered snow white head holds on tight with a good bit of retention before it finally melts away leaving a faint bit of lace behind. Sweet malts come to forefront on the nose followed by a touch of fresh baked bread and a little bit of honey too. Not one touch of boiled corn or rice either like almost every other lager that some one hands me usually has. Nice.
On the tongue and in the mouth the first thing that is noticed is a crisp, bubbly thing that is light and effervescent but not all thin and watery. A strong but not bulky caramel like backbone carries the weight for the tinges of lemon, pepper and grassy hop nuances to make their appearances giving the beer an overall pilsner thing to it. It finishes clean and refreshing leaving just a slight tang behind.
Needless to say, it has slightly changed my opinion of, at least of a couple things, Atwater beers. A person could session on these all day.
The store I got them on has been put on notice to now keep these in stock regularly as now they are not the go-to beer for band practice but something I like to have on hand for those mood where I just want a beer while cooking dinner, sit down to do a bit of writing or when some friends come over and will just knock back whatever is on hand (as long as it's mine most of the time it seems).
http://www.atwaterbeer.com/
Posted by Dale Merrill

Notice the says Latrobe, Pennsylvania on it. Not brewed in Detroit but contracted to be made by those who have the glass lined tanks.