In nature, fungi is used as a reference to mosses, molds and mushrooms. They thrive off moisture and a lot of times develop in darker hours of the day. 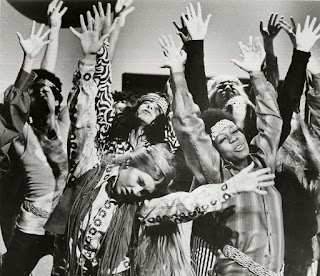 Describing the overall sound of this album by this Texas combo description phrases like music for dusk and words earthy, grassy and wet come to mind so their chosen band name seems apropo.
Wrapped in reverb, bathed in full moonlight and swaddled in a misty early morning haze the Fungi Girls, who aren't even of age to drive a car without a parent or legal guardian in the vehicle in most states, sound like old souls with young hearts that have the brightest color of red table wine pumping through their veins.
Sad eyed shoegazing gets battered and washed ashore by fractured surf music ripples on songs like "Honey Face". "Hevrole" and "All Night Blues".
Worshipping of clever and cannabis enhanced 80's "college rock" bands like the Feelies and Rain Parade is given the once over twice before rinsed in algae clouded water, put through the ringer and set out to dry in the sunshine on the album's basement-psych title track, "Doldrums" jangle boogie and the pretty flowers growing in the middle of landfill feeling of "Lucie".
"Velvet Days" pricks the ears like the Cramps living in a snow capped mountain village instead of dwelling in that neighborhood of Hell where all the best jukeboxes and cocktail lounges are and sunshine pop shines on a swamp on the album's closer "Little Miss Flora".
Music for both early morning wake up motivation and late evening cemetery walking.
http://losfungigirls.blogspot.com/