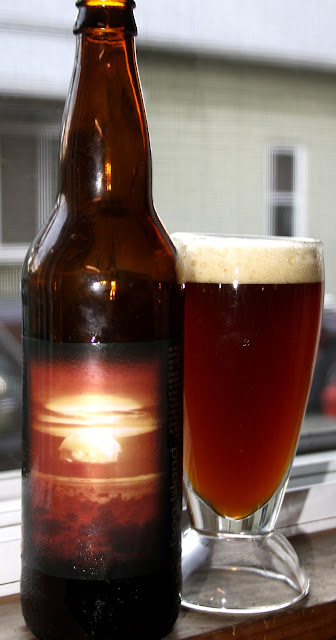 Named after the bomb a thousand times more powerful than the one's the US dropped on Japan in World War II this double IPA from Ann Arbor's Frog Island brewing claims on the side that it's "the taste the frightened Eisenhower". Now, I consider myself somewhat of a 20th century US history buff. I know our country's 34th president used to smoke four packs of cigarettes a day but I don't recall ever reading anything about his take of craft brews, let alone double IPA's, so we'll just leave that claim to bravado for now and get down to the eyeing, sniffing and sipping.
A cloudy maple syrup in color with a two finger fluffy head that melts fairly face leaving a consistent lace all the way down the glass. It's aromas are a bit earthy with some sweet malt, rolled oats and a dint of lemon peel.
The first thing announced in the flavor is something woodsy. Almost an oak aged thing is what reminds be of with a touch of of malty almost brown sugar sweetness that flirts slightly with something akin to a Dogfish Head 90 Minute IPA. Next this chewy but fluffy/soft but full textured brew takes on a little bit more caramel flavors that still don't really give a hint that it's hitting at an 11% abv. It finishes with a burst of citrus With the average amount of stickiness one would expect from a DIPA. Not more and not less. Just right down the middle.
Castle Bravo is the first Frog Island beer I have tasted and though my mind (or tastebuds, as the case may be) weren't exactly blown away making me declare "This is one of the best DIPA I've had ever" it was still quite decent (much better than what the first takes on Beer Advocate have been on it at least) and has now piqued my interest on trying some of the other things they have to offer.
http://www.frogislandbeer.com/
Beer Frog Island IPA Michigan