DANIEL JAMES GANG "Nothing I Can Do" 7inch EP

What is it with it these days that when bands look towards the 1970's for hard rock inspiration they tend to take themselves so seriously and lack the main ingredient of honest to goodness fun? It seems not all that uncommon any more for a band to come 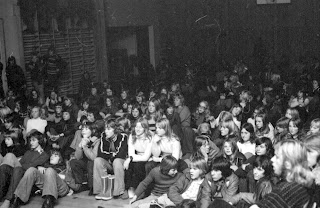 along with the kind of riffs a person would want to crank out of a '73 Dodge Charger but after a few times around it just becomes another tune that gets ya thinking "Whatever?"
Is it because of Gene Simmons who fancies on thinking he invented hard rock then wrote the book on the business of it and looks as fun as just something needed for the ledger line in a marketing plan? Or is it douche bags like the clowns in Buck Cherry who try so hard to make everyone dumb enough to believe they are total poon magnets by reminding whoever will listen to them that they mention it every song. It's not even like they are singing about the poon itself but how cool they are for getting the poon. Freaking overcompensating to make the mooks jealous I guess. Y'know, the kinds of bands that will mention the New York Dolls and the Sex Pistols as being major influences but don't really like the Dolls other than in theory and are more influenced by the well past expiration date era Motley Crue or Megadeth cover of "Anarchy In The UK" (in which they probably had to look up word Anarchy in the dictionary after hearing the song) than the Sex Pistols themselves.
Luckily there are band's (though rare) that can do the hard rock thing, infuse it with a proper amount of punk rock and sound like they're having actual fun just acting like they are. Wisconsin's Daniel James Gang is one of those kind of bands. Dragging glam into the garage, and though they are far the best looking boys on the block, leave the make-up, hairspray and bedazzled with studs spandex get ups out in the yard, this gang kicks it the sound around giving it some must needed dings and bruises, have fun and even score some poon along the way too.
Instead of listening intently to some Gene Simmons lecture they get kicked out of the party after bringing up Ace Frehley's name when Gene asks "What is the soul of the music". It's no big deal them though because while keying Gene's cars on they're way out to the street Ace drives up in yes, a '73 Charger, and asks them if they need a ride. They get along so well, Ace not only lets them drink all his booze but then gives them cash to go out and pick up some more.
http://www.danieljamesgang.com/
Posted by Dale Merrill