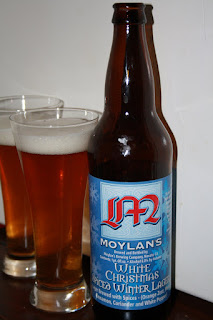 Ahhh, the Christmas season. A time for peace on earth. good will toward man, stressing out, being depressed and dealing with hustle and bustle to the point where you want to burn down everything within a couple miles of the shopping epicenters of the area you live by. It's also a time to give a try to a seasonal ale or two that maybe you haven't before. Moylan's just started being available in these parts I live in and since I have tried a couple of other things they brew that I found pretty decent I figured it was worth giving a shot.
Gold with reddish highlights in color and somewhat bubbly with a modest but fluffy head that leaves a snowdrift like lace behind. The nose is predominantly lager yeasts and malt along with bit of hay. There some are spice characteristics to it but with the variety of ones used (orange zest, mace, cinnamon, coriander and white pepper) none stand out from the others-they all blur into each other.
The spices, primarily the coriander and some dints of the orange spice up front and some slight pepper taste in the finish, do come out in the flavor but as in the scent none of them really stand out. The spices seem like they were added an afterthought than something infused to compliment the flavors. It's not bad (especially compared to some stinkers in the Christmas/Winter ale style that have hit my tastebuds in the past) but it just lacks that "something special".
http://www.moylans.com/
Posted by Dale Merrill

Sounds like another passable but not quite essential winter lager. Just tried the Smuttynose and wasn't that impressed; gonna give the Brooklyn variety a shot tonight. This might be a style where Sam Adams actually beats a lot of the hot shot craft brewers!

Josh,
I've tried A LOT of the Christmas/Winter ales the pass few years and honestly the only two I can 100% recommend are the ones by Great Lakes and Bell's. And even with those two the Great Lakes is the only one where I've said "Wow! This is awesome!"