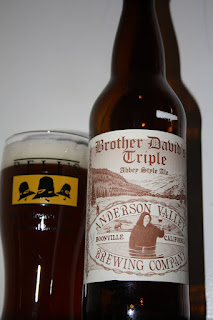 From the solar powered Northern California beer maker Anderson Valley Brewing Company come this series of "Big Beers". They are the people behind one of the best Oatmeal stout's on the planet (Barney Flats Oatmeal Stout to be exact) so I was anxious to give one of them a taste. As luck would have I was visiting one of my usual beer cellar haunts and the man behind the counter said "Dale, I have a gift for you."
"Free Beer? Yes!" It must've been my lucky day it seemed.
A slight bit darker than some Tripel Abbey ales I've seen and drank in the past. It's almost brown in it's shade even when held up to the light. The head was modest and faded out fairly quickly but a good bit of lacing all the way down. Notes of caramel apples along with a big blast of alcohol show up in the scent. There are the banana, spices and hint of honey thing in the flavor that are common for the style but they seem to get bossed around by too much of a grainy malt. As it warms the malts do step away somewhat but what seems to be left is something slightly lacking as far as a complexity as well as a little thin as far as the body is concerned too. One thing I did find interesting is that though the alcohol comes on quite strong in the scent it is hidden very well in the taste til you get almost to the very end. "Almost" because there is a hotness that comes out right at the tail that will bite you if you're not ready for it.
Since this was gifted to me I can't really complain much about it but considering some of the goodness AVBC can serve up I was somewhat disappointed.
http://www.avbc.com/
Posted by Dale Merrill