"Four chords, One finger, All feeling...." That was the consensus of my friend Brian when I showed them the video of these two Australian gals tune 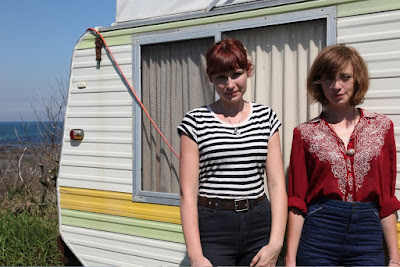 "Golden Town". Another friend Lon said something to the extent of "Wow! They make a lot of sound with such a limited set up" when seeing the same video. For both of them it was their first introduction to the band. I told them nothing other than a note saying "Check this out" and link. Both of their comments could pretty much sum this album into a nutshell but since I gave them both credit now I guess I just can't plagiarize what they said and call it a day on this review now can I? Besides, the record has been spending plenty of time on my turntable since it arrived I have a few things I would like to add to what they had to say anyway.
With just the right amount of drone complimenting the melody in the guitar lines, a voice that that sounds like sweet and soothing honey that was then aged in a gun powder keg and then rolled in talcum powder with their mixture of sweetness and volatile swings and a drummer that isn't afraid to bash the hell out of the kit (and I don't mean "...for a chick" either. I mean if the drums were a living creature they'd be without hardly a drop of blood left in them after the pummeling. I mean she's no Keith Moon or anything but she also and pussyfooting either) Super Wild Horses make every other band dubbed in every other blog page as "the next Vivian Girls but better" sorta pointless. It seems a lot of those bands that have been called that were looking for that exact description as where this band sound like they have much better things on their mind.
Bits of late 70's DIY-punk, perhaps an idea or two gleaned from a scratchy hand me down Jesus and Mary Chain record (but without the total over the top ridiculous reverb on everything sound that a lot of the apparent modern day JAMC apers go all ga-ga on), one string melody buzz that stick in the brain like a peanut butter and jelly sandwich does to the roof of the mouth if there's no glass of milk around to wash it down make for a listen here that asked to played flipped over again and again as each side end.
http://www.myspace.com/superwildhorses
Posted by Dale Merrill