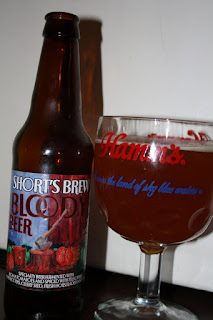 Just in time for Halloween. Nope, not pumpkin beer. I just had to pass on all those this year because I've had more than my share in the past but figured something called Bloody would work well for the seasonal theme and mention instead. What you have here is those crazy beer makers up in Bellaire, Michigan combining the ingredients that go into a Bloody Mary which in this case is Roma tomatoes, tellicherry peppercorns, celery seed, fresh horseradish and dill, brewing it up and bottling it. I'm all about a Bloody Mary almost as much as I am about great beer and judging from the ingredients it seems that they know what goes into a superb Bloody Mary so I was pretty curious about trying this.
There's an obvious red tint in the color from the tomatoes. No head to speak of but there is a somewhat of a runny and spotty lace that doesn't stick around much.
The scent of dill is really strong on the nose along with some slight notes of ground pepper and tomato juice. There is a slight thickness in the beer but hey-WE ARE talking about tomatoes here. The thing is though the flavor of tomato in the brew itself seems a little overrun by the domination of the dill that is all over the place. Letting it breath and adjust to room temp does take a slight edge off that, bringing some of the peppercorn and horseradish hot end but not by much. Dill everywhere.
Now, I can munch on some pickles while enjoying some suds but something here just ain't working for me. I do admire Short's for all their crazy experiments they do with beer. They deserve much credit for their ideas and innovations and but sometimes their things seem to fall into a novelty category. They have many things that get up and throw a no hitter-to these taste buds though, this is not one of their best days on the mound.
http://www.shortsbrewing.com/
Posted by Dale Merrill