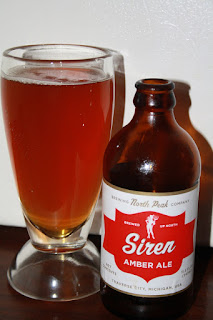 Pretty sure I've gone off to some extent before about how I am on the fence with most amber ales. There's usually something about them that just doesn't strike my fancy with them. Either they're just bland or take the other end of the spectrum and end up to spicy or something. I guess it's one of those curses of macrobrew making something to get the mainstream beer audience to think they're purchasing something fancy or craft brewers flexing their know how and righting some wrongs. One of the things Traverse City's based North Peak Brewery seems to be shooting for is something traditional and true to the original pre-adjunct grains days-making something good but not going over the top with tweeking and experimentation.
Nice, reddish gold transparent color with a very minimal head from a medium pour. A slight ring of foam forms around the top of the glass leaving a spotty lace pretty much through the bottom of the glass. On the nose the malt is quite robust and earthy with some green apple and smokey notes. Slightly sour apple characteristics come out all through the flavor mixing well with the malt on the front of the tongue. It finishes up with a flourish of hop tinge. Not sticky but not buried either.
If you are looking for some amber that will blow your mind or filled with levels of flavor complexity this probably isn't going to be the one but if you are looking for a simple and solid one that is quite sessionable it's worth giving a try. Besides, with those stubby bottles and retro label design that have become a North Peak trademark you can invite an old-timer over and share a couple with them. It may get them telling some stories of the good old days.
http://www.northpeak.net
Amber/Red/Brown Ale Beer Michigan North Peak