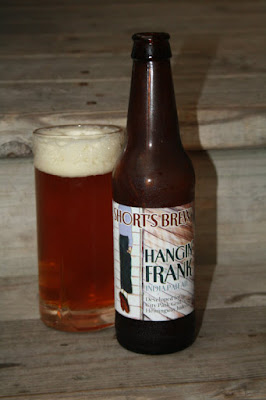 Short's developed this IPA for the City Park Grill in Petoskey, Michigan. The place serves some good grub but is most famous for it being a place Ernest Hemingway like to hang out/hide out at and it being haunted by a ghost named Frank who hanged himself in the cellar of the place about 100 years ago.
Short's has already made a name for itself for it's superpacked with hops flavor of their Huma Lupa Licious. In contrast to that this is a more mellow take on the style. The brew color is a nice burnt orange in color and sports a moderately sized off white head that holds on pretty tight all the way down the glass leaving a lace all over the place. Pine like hops are noticeable in the aroma but there's also a lot of fruit nuances such as pineapple and peaches that come out. It's all anchored by a sweet biscuit like smell of crystal malt.
The hops aren't as aggressive and have more of a sweet fruit flavor than that pucker up sting Huma is known for. That's not to say this lacks the bright-n-green bitters that other Short's more than hop friendly brews but this has a friendly pinch to the tastebuds more than an angry bite.
For anyone who has been considering delving into the craft beer world and doesn't know where to start (and no Leinenkugel, Blue Moon and those specialty Michelob's don't count no matter what the commercials say, how bartenders repeat what the beer salesman told them and what the guy behind me at the beer store who was behind me line was saying while I was purchasing this) here's a great place to begin your discovery.
http://www.shortsbrewing.com/
IPA Michigan Shorts