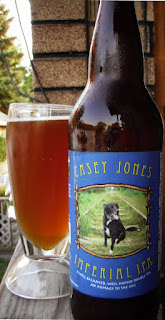 Here's another brew courtesy of a care package from Chris Owen. I mentioned my constant crush on IPA's to him and he slipped some California style ones. This one, from Fairfax brewpub Iron Springs, is one I've never heard of before and from the way he made it sound is pretty much just regional to his immediate area. I'm all about checking out the local flavor so bring it on.
The color is dark orange at first glace. It appears opaque when sitting on the table but since I'm in the backyard I hold it up to the sunlight and a golden haze can be seen glowing around the edges. The head was modest but leaves a good cap behind that laces all the way though. On the nose the hops aren't the kind that punch at it but do have a nice fresh zing to them while the malts give the aroma a pleasant sweetness. Sorta reminds me of sourdough bread sprinkled with some lemon zest and a fresh sack of apples.
On the lips and tongue the brew itself has a nice and creamy feel to it. At first sip a rich molasses flavor is noticed then pepper and pine hop bite takes over the proceedings hanging on almost to the end but the malts smooth step in again it with warmth and sweetness. The finish features a dint of hotness from the 9.5% abv which is, for the most part, masked up until then.
Not really into sparking another one of those "What defines East Coast/West Coast/Michigan IPA" debates again but if I was to go into this one blind I think I would still define it as a solid west coast (double) IPA and there ain't nothing wrong with that.
http://ironspringspub.com/
Posted by Dale Merrill