July 19, 2010
No matter what style of music King Louie Bankston decides to delve in be it southern fried rock with his Loose Diamonds, the full on garage trash like he did when 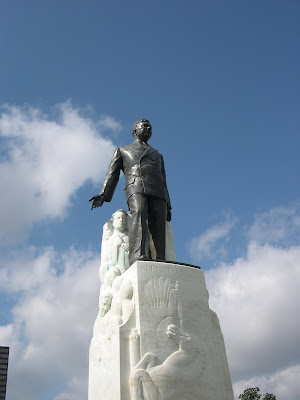 he joined forces with Eric Oblivian and Jay Reatard (who passing they pay tribute to on the insert with a pic of the band dumping out beers in his honor) in the Bad Times, dirtbag power-pop in the Black Rose Band and a list that can go on and from his rural blues one band man to the Exploding Hearts to scum metal (and pretty much everything in between....except for maybe cool jazz and some techno thing-but who knows maybe he even has projects like those in the works or at least in his head too) it never sounds like genre hopping. Mainly because when Louie sets out to do something he does it in his own Louie way putting his stamp (and usually his stomp too) all over it.
For the Missing Monuments it's sounds like Louie and crew have time traveled Collegetown USA 1985 and got jobs at the record store where they argue the merits of the Feelies "Crazy Rhythms" vs. "The Good Earth" (Ya know-the downtown NYC oddballs vs. the rustic tin shed dwellers), scoff at people who buy Monkees records out of the 25cent bin (while being silently pissed they didn't find them first) and telling the Replacements new found jock audience how Tommy Ramone's production on "Tim" makes them sound more like the Jefferson Starship than America's next best Rock-n-Roll band (to which the jocks reply "Starship rocks" and then threaten to kick their punk new wave faggot asses if they ever see them at a kegger party).
Recorded on what sounds like a budget of $200 bucks (and half of it spent on whatever the popular regional cheap beer was) you get two ragged but right songs here full of frayed and cotton pilled flannel jangle and cigarette burned twang, copped from 1960's Top 40 soul hit basslines, hoarse & boozy choruses and wondering what would've happened if they went on to be produced by Nick Lowe or Mitch Easter.
http://www.myspace.com/missingmonuments
7inch Douchemaster Louisiana