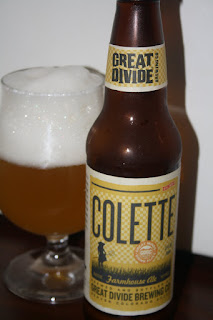 It can get a little tricky being a beer snob when the weather is as hot as it's been the past week or so. Big bold brews, no matter how amazing and perfect they can be, sometimes just don't hit the spot right when the mercury is hitting 95°F. It leaves the choices of readjusting the tastebuds and guts to something that's a "killer deal for a 30 pack of cans", usually has the word "Light" in it's handle and who's name is emblazoned on banners that say "Welcome Boaters" that are always hanging in front of tourist town town party stores or finding something good that fits the season.
After a few false starts for myself when it came to Saison and Farmhouse ales I've found that this summer, so far at least, they've been one of the things that has been doing the trick on sweltering days. This one by Denver Colorado's Great Diving Brewing especially has been.
With a cloudy yellow that resembles the summer sun right before it starts to set and a fluffy head that hangs on strong and leaves a serious lace all through the glass it's already made known in presentation alone that Collette is a girl that doesn't dilly-dally. Aromas of citrus zest, tall grass after a rain, white pepper and banana esters fill the nose-all of them fragrant, refined and working in harmony with not one of them overtaking the proceedings.
Citrus, particularly lemon zest and orange peel, and some sour apple head off the flavors. Bready yeasts and coriander take over the middle setting their own distinction from what is first tasted. A third level of complexity is brought into the finish where a couple of dashes of banana shakes hands with peppery spices. There is the slightest of alcohol warmness at the end but is hidden very well to the point where one might not realize they're sipping on something in the 7.5% abv range. The brew is very fizzy and effervescent all the way through the glass and though all of the above flavors do linger a bit on the sides of the mouth and the back of the throat after each sip they are light and air-not sticky. Isn't that just what yr looking for on a hot summer day?
Not only does Great Divide make some really incredible beers they also have some of the best looking and simplistic label designs going. All of their styles also feature a little character in the graphics to go along with the beer. For instance: Their Denver Pale Ale has a mountain goat, their Titan IPA a gladiator, their stout called Yeti has, what else, a yeti and so on. This one has the silhouette of a short dress (I'm guessing it's gingham) wearing farmer's daughter out in the field with a pitchfork and spiked heels on her feet. Where is that country girl at?
http://greatdivide.com/
Beer Colorado Farmhouse Ale Great Divide