"Damn generation gap. Do I really have to explain who Nikki Corvette is?" I think to myself. It seems that yes, I do. Of course I do have to realize that not everyone grew up in the 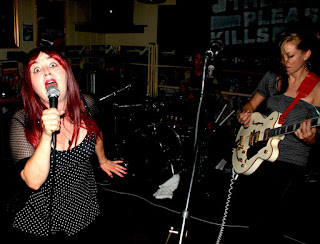 days of having a subscription to CREEM magazine and got the Bomp! newsletter/mail order list in the mail (you know, actual mail delivered by a mailman) when they were in junior high but even some of the the decade or two younger than me rock-n-roll fans who can sing the lyrics to the Donnas "Gimme My Radio" (which Nikki gets name checked in) think she's a fictional character that just happened to rhyme with "cheeba cigarettes". Little do they know that she held a pivotal role in Nikki and the Corvettes by not only as a lady not only fronting a rock-n-roll band in the dawn of the 80's but writing her own songs as well paving the way for bands from the Go-Go's through the Donnas and beyond.
After taking a long while out of the spotlight Nikki returned to the rock-n-roll world in the early 00's after Bomp! reissued the long out of print Nikki and the Corvettes album to not only a devoted slew of original fans but a generation of new ears too. She eventually returned to her hometown of Detroit, became friends of Amy of the Gore Gore Girls and as a result formed the band Gorevette and released the EP that we have here.
While a couple songs here are reminiscent of the Nikki (and the) Corvette(s) of yore such as the bouncy & bubbly "Baby, Let's Rock" and the nod to the Shangri-La's (check out the talking part in the song to hear for yourself if you don't believe me) "Honey, Please Don't Go" others like the full of fuzz box guitar blare "Nothing's Gonna Stop Me" and big beat backend groover of the title track stay loyal to the good things that are rock-n-roll but souped them up to these days of the post jet age. Welcome home Nikki. It's great to have you back!
http://www.gorevette.com/
Posted by Dale Merrill