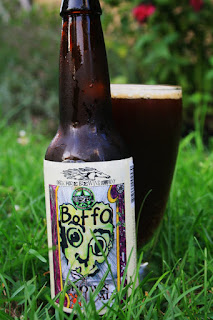 Yeah, yeah. I know. It was just a little over a week ago where we went off here about getting away from the heavier and darker ales because it's summer and now we are getting ready to discuss a brown ale. Well, It's an offering from Dark Horse, a Michigan brewery that makes some really solid beers but don't seem have as much of a high profile as some of the breweries in the state, and just showed up in my neck of the Mitten State woods this part week (after being around in other part of the state in bottles for a couple month now this release season. Chalk another one up to the slow on the draw distro's that controls this part of the state) so it just could not wait til cooler day.
Dark brown in color. Looks a bit cola really. Since it's a Dark Horse brew there's not much, if any, filtering of any sort going on so the floaties of grain hanging around the sides of the glass look sorta like soda bubbles. The was a tan in color and a modest half inch think that fade down fairly quickly. The scent borders on a cola too with the roasted malts taking on a caramel, coffee and molasses aromas.
First flavor to come out is that of sweet (but not overtly sugary) cream. The mouthfeel of the brew also has a light cream to it as well now that I'm mentioning it. Right behind it is caramel malts, brown sugar and a bit of nuttiness. The finish has something of a porter taste to it with a slight touch of bitters and baker's chocolate. There's some brown ales out there, to me at least, that have too much of a grit or dirt flavor going on. Boffo isn't like those. Nice level of complexities, very well rounded and quite flavorful. Definitely another good job from those malt, grain and hops outlaws over there in Marshall, Michigan
http://www.darkhorsebrewery.com
Beer Brown Ale Dark Horse Michigan