the PIZAZZ "Get Out Of My House" cassette

All bands out there who consider themselves "pure pop" should quiet down for a minute and take some notes from Detroit's Pizazz. They know that you don't need layers of pro-tooled trickery and piles of overdub frosting. Sure, all that stuff makes everything all 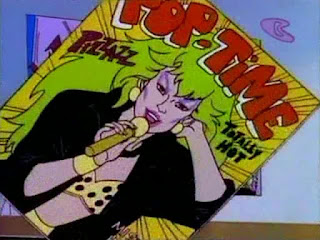 glossy & sparkly and we all know how shiny objects can entertain the simplest of minds but if the basic ingredients aren't of high quality all the doo-dads and added fluff that mask what is lacking. There has to be solid SONGS or all that stuff is just a dog and pony show.
Recorded on what sounds an 80's Tascam cassette 4 track machine (tape hiss, guitars occasionally cracking up in treble regions, the bass gnawing the entire low-end for seconds at a time) by Bobby Harlow of the Go (who pulled off the same kind of almost perfect loud "pure pop" record a couple years back with Howl On The Haunted Beat You Ride) the twelve songs here are not any audiophiles dream but they don't need to be. It isn't one of those "Let's be deliberately lo-fi and pinned deep past the red line" affairs. The recording do have that "Let's set up in the bedroom/basement/family room" quality to them but it sounds like they made the best of attempts to get the top quality out of situation regardless. The hooks are catchy, the harmonies soar and the songs are solid.
Commingling (mostly) the Nuggets boxsets (the Euro and more recent L.A. one than US and San Fran ones to get a little more specific) and the Beach Boys with Britpop and the Byrds-the Pizazz serve up the Move baroque pop moves song like "Benjamin Woodruff" and "Plan B", provide the soundtrack for summer daydreaming on tracks like "Ocean Liner", "Jenny Says" and "Dolphin Patrol", make up a batch of backyard psych on "Living Like Animals" and get all loud sounding like the prime moments from Ride's first couple EP's on "Heartaches and Heart Attacks."
I have a feeling I could end up wearing out this cassette pretty fast. Anyone put this stuff out on vinyl? If not-someone should.
http://www.myspace.com/thepizazzcare

I think they're was an vinyl pressing of it originally. Don't remember who put it out though.

its coming out on vinyl on burger soon i think